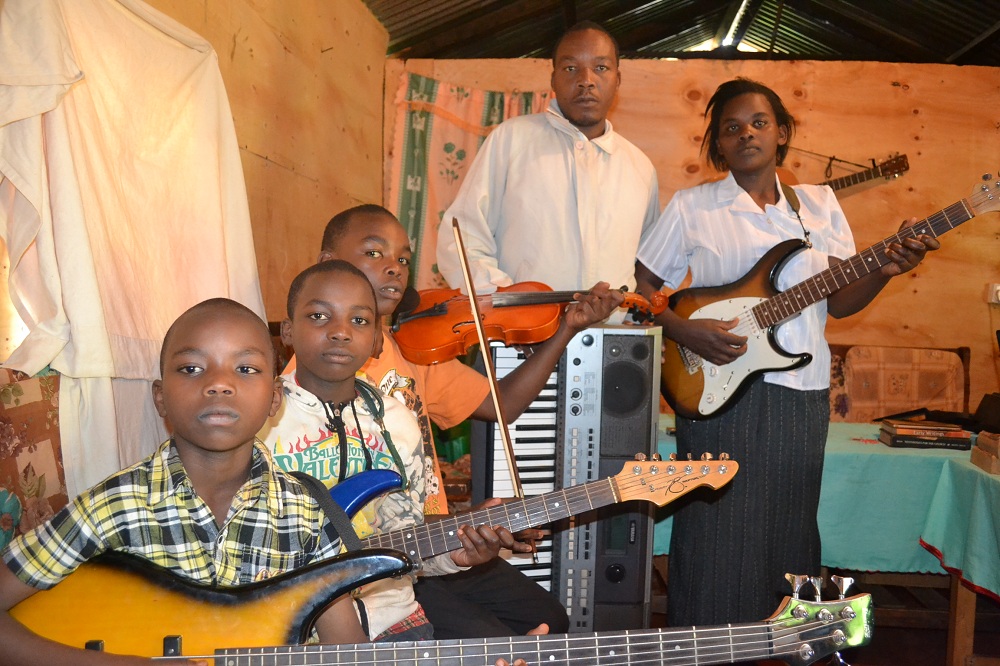 [dropcap]M[/dropcap]aking a living through talent is catching up in Kenyans as more and more campaigns are launched to urge parents to maximise their children’s gifts.

But even as the trend is catching up, a man from Kairi village, Gatundu North constituency has been championing this course earning a living through his musical talent which he is keen to pass on to his children.

Lyrical tunes linger in the air as you enter the family’s compound of evangelist Samson Ng’ang’a Munyambo and upon entry into the house, you are met by the sight of well arraigned guitars, two keyboards, saxophone and a violin all across the sitting room walls.

The family’s popularity in Gatundu North has earned them fame attracting newsmen to their backyard.

Each of his children and wife is able to play a guitar, violin, and keyboard and whistle trumpet. All he says, are musical instruments they use to entertain Kenyans in weddings, burial ceremonies and in churches.

Munyambo has formed a family band, which has produced an album with 12 songs; with all instrumental arrangements and vocals done by the family members.

He says that his wife, two sons and her daughter’s rhythmic talent has been the source of the family’s livelihood.

“I have managed to educate all my children to their current level by the help of music. I live, eat and drink music. My children have come to my aid and we are moving very fast in terms of development because upon their enjoinment in my passionate career, we are now able to go for more shows from which we make a living,” says Munyambo.

He reckons that he started his musical career in 1999 before commencement of training guitar lessons to willing locals. He furthered his keyboard know how in the year 2002 before introducing his family to instrumentals.

Churches fight to have him as their permanent instrumentalist but his firm principle to follow Seventh Day Adventist church doctrines pushes him back.

Although they enjoy enough sustenance from their musical endeavors, the Munyambos’ says that the journey has been full of challenges singling out low appreciation of talents, temptations to offer secular entertainment, which he says collides with their staunch Christian values and poor payment of royalties.

His youngest child Jeremiah Mwangi is a nine-year-old, whose love for music is irresistible points poor uptake of talents in Kenya. He challenges the government to establish talent hubs across the country to nurture such God given gifts.

“I urge the government to create talent hubs across the country to better the careers of those whose passion is to pursue certain gifts. It is with no doubt that if such centers are established, more youths will chase their dreams,” Mwangi advises.

His daughter Mary Wacheke Ng’ang’a, a class 5 pupil at Kairi primary school advises youngsters to develop a habit of practicing their talents. She said that this will help more youth avoid being involved in the treasures of the world citing that idleness among children was the source of societal immoralities.

“The reason many youths are falling prey to illicit brews and outlawed drugs is because they lack someone to hold their hands. Although the formal education is important, parents must not invoke their children to go for certain professions if their dream and passion is in talents,” says Wacheke.

Munyambo wishes to transform the society by training more instrumentalists as he hopes to become an African choir star.

He challenges gospel musicians in Kenya to reestablish Christianity values which he says has eroded over the years accusing artists of concentrating on monetary gains forgetting their vocation to serve.