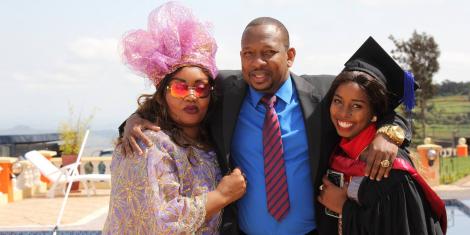 (L-R) Primrose Mbuvi, Nairobi Governor Mike Sonko and Saumu Sonko pictured during a past celebration. A 2018 trip to New York by Primrose and Saumu is being cited as evidence in impeachment proceedings against the Governor.

Saumu Sonko, a daughter of embattled Nairobi Governor Mike Sonko, was mentioned prominently in day one of impeachment proceedings against Sonko in the Senate.

Members of the County Assembly in Nairobi had passed a motion to impeach Sonko over alleged corruption, mismanagement and disregard for the rule of law. The Senate on Wednesday, December 16 sat to discuss the motion vehemently opposed by Sonko.

Breaking down their case against Sonko, the legal team zeroed in on a controversial 2018 trip to New York by Saumu Sonko.

Saumu accompanied Sonko’s wife, county First Lady Primrose Mbuvi, to the 62nd session of the Commission on the Status of Women held in New York from March 12 to 23, 2018.

MCAs claim that millions of public funds were illegally spent on the trip. They alleged that Saumu officially travelled as a ‘Ward administrator’, despite holding no such role.

They alleged that she received allowances running into millions of shillings, and flew first-class.

It was further claimed that the county paid for a helicopter to take Saumu on a sightseeing trip over New York, the ‘Big Apple’.

In addition, it was alleged that Saumu took a break from the New York trip to visit Philadelphia in the state of Pennsylvania.

MCAs seeking to have Sonko ousted claimed that Saumu was accompanied by individuals from the media who were paid allowances of Ksh100,000 each.

In March, Kitusuru MCA Alvin Palapala had sought answers from the county assembly’s Budget and Appropriation Committee claiming that Ksh2.4 million was spent on the trip by Saumu and Primrose.

“Article 201 of the Constitution on principles of public finance provides that public money shall be used in a prudent and responsible way. The expenditure included payment of tickets, hotel accommodation and Sh800,000 per diem,” Palapala noted at the time.

In response, however, Sonko argued that first ladies travelling to the summit were allowed to have two people accompanying them. He claimed that he personally footed the bills for his wife and daughter during the trip, dismissing the assertion that taxpayers money was spent.

He further stated that Saumu’s inclusion had been approved by the Head of Public Service, Dr Joseph Kinyua.

“My attention has been drawn to unsubstantiated claims made yesterday by the Kitisuru Ward MCA, Hon. Alvin Palapala, that the Nairobi City County First Lady and my daughter Saumu Mbuvi made an irregular trip to New York in March 2018 at the expense of the taxpayers. First, I wish to clarify that her inclusion, and that of my daughter, in the said trip were sanctioned by none other than the Head of Public Service, Dr Joseph Kinyua.

“As such, she was entitled to a fully funded trip by the Nairobi City County government, like any other delegate, to attend the 62nd Session of the Commission on the Status of Women (CSW 2018). However, I personally catered for the transport, accommodation and related costs for both my wife and daughter. It is therefore preposterous and ignorant for the said Member of the Nairobi City County Assembly to make allegations that he cannot prove. If anything, I would like to challenge him to provide any proof of payment of per diem to either my wife or daughter,” a statement issued by Sonko at the time read in part.