Key functions of the Nairobi City County Government have been officially handed over to the National Government, leaving Governor Mike Sonko to play more of a ceremonial role and throwing the new managers into the deep end of a city drowning in filth and strangled by corrupt cartels.

President Uhuru Kenyatta presided over the official hand over, which followed an earlier agreement between the two levels of government on 25th February 2020, which saw Governor Mike Sonko, who is facing corruption cases, hand over key functions of his administration.

The Nairobi takeover was to be effected after 21 days from the day of gazettement of the partnership on 25th February. The deal, according to Devolution Cabinet Secretary Eugene Wamalwa, would be renewed after two years. While the city’s management has been taken, Sonko will still yield legal and political power, since his mandate as an elected governor still holds.

As per the arrangement, the national government will take charge of health, transport, public works utilities and ancillary services as well as the county government planning and development dockets.

President Kenyatta said the office will operate on behalf of the national government to deliver services to Nairobi residents.

Nairobi Metropolitan Services have been also tasked to construct two Matatu Termini at Park Road Ngara and Desai Road to ease congestion at the Central Business District. Other functions include the creation of pathways along Miundu Mbingu and Wabera Street.

READ >> Doing Business With Counties: Get This Wrong and You Can Easily Lose Money

Speaking during the hand over on Wednesday, 18th March, Uhuru said the Nairobi City County has had to grapple with cartels in its efforts to deliver services to dwellers.

“The biggest problem that the city faces is corruption and cartels that have a vice-like grip on City Hall,” said President Uhuru. “The cartels and corrupt practices have made service delivery almost impossible.”

In the Nairobi Takeover, the Head of State singled out the collapsed garbage collection function, with heaps of trash blocking offices and shopping malls.

“There is no doubt that there have been challenges in the delivery of these services,” Mr Uhuru said. “Part of these challenges have been as a result of internal constraints and capacity issues afflicting Nairobi county.” 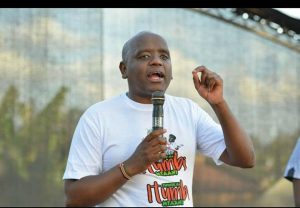