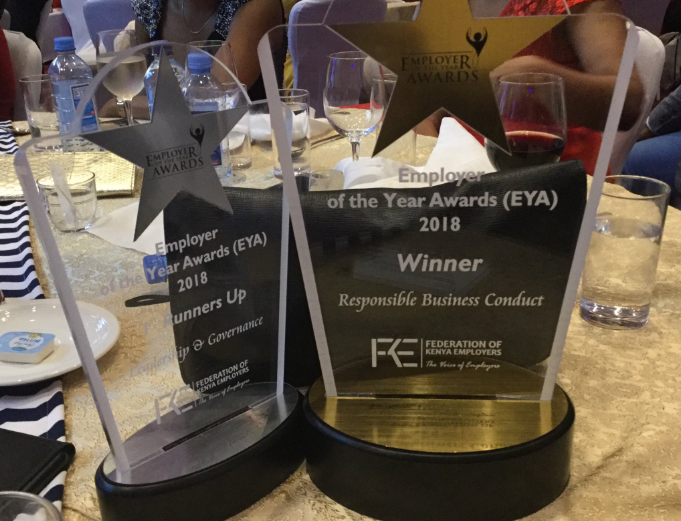 If you are wondering which companies are the most plum to work for in Kenya, then British American Tobacco (BAT) Kenya, Safaricom Plc and KenGen Plc represent your best bet.

The giant cigarette maker retained its crown as employer of the year during the second Federation of Kenya Employers (FKE) Awards 2018 held at the Radisson Blu Hotel in Nairobi on September 21.

BAT Kenya won the same award last year when they beat Centum Investments and The University of Nairobi (UON). This year BAT Kenya edged out Safaricom and KenGen to win the coveted award.

“I would like to congratulate everyone at BAT Kenya for their hard work that led to their success at the 2018 FKE Kenya Employer of the Year awards, said Razeeah Belath BAT Kenya’s Head of Human Resources East and Central Africa.

The FKE Employer of the Year awards promote and encourage best practices in corporate performance, people management and industrial relations practices amongst employers in Kenya in a bid to raise productivity, sustainability, enterprise, performance and responsibility.

“What motivates employees is the workplace environment. How people are treated by their supervisors. Intrapersonal relationships with the other members of staff. Decisions and actions of managers can always result into unintended consequences. If not well handled can destabilize employees,” said Prof. Margaret Kobia, Cabinet Secretary Public Service and Gender who was the chief guest at the event.

More than 50 companies were in the running.

Safaricom clinched the Corporate Performance and Innovations and Productivity awards beating UON who were the first runners up in both categories.

READ : LOCAL COMPANIES MUST UP THEIR GAME TO THRIVE

LVCT Health won the diversity and inclusivity award beating Oserian Development Limited who were first runners up in the category.

BAT Kenya also won 2 other awards at the fete. The company was recognised for providing the best work place environment for its employees ahead of Centum Investments who were first runners-up.

The tobacco manufacturer was also recognized for having the most effective Human Resource Practice, an award they won at the expense of Ecobank Kenya who were first runners up and the only bank to finish within the top three of any of the nine categories that were up for grabs on the night.