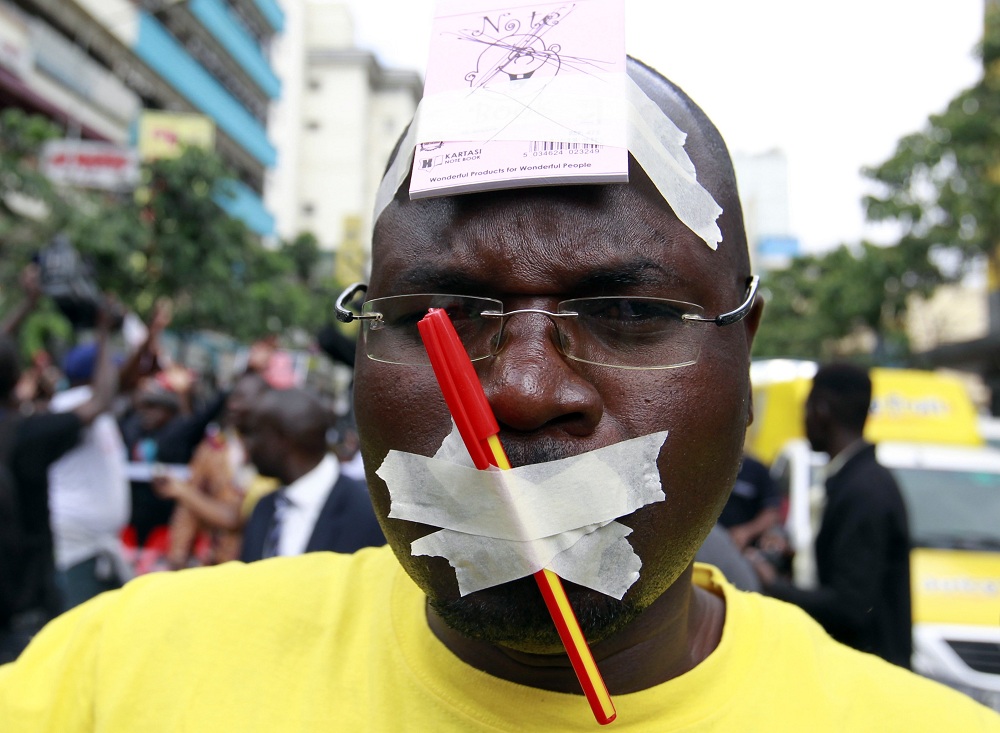 [dropcap]T[/dropcap]he Tuesday attack on Citizen TV senior political reporter Francis Gachuri and NTV camera lady Jane Gatwiri by hooligans at the Wiper Party headquarters ahead of a press conference by NASA leader Raila Odinga once more highlighted the sensitive environment journalists, and political reporters specifically, are being forced to operate in.

And it is not just a Kenyan phenomenon. In neighbouring Uganda and Tanzania, political journalists and editors are finding it almost impossible to tell the truth as they are wont to be taken in by state security agents and their media houses’ operations shut down dare they raise their head above the surface. Even a post on social media is enough to land someone, a journalist or not, in trouble.

Government agencies, including in Kenya, have come up with tough guidelines to govern the use of social media, some of which are seen as an infringement on the freedoms of speech and expression.

In far south Zimbabwe, long-term President Robert Mugabe has been the subject of choice words after naming a minister responsible for Cyber Security Threat Detection and Mitigation, which has since come up with strict guidelines that administrators of social media groups must adhere to. Some have since nicknamed  Patrick Chinamasa as “the minister for Whatsapp.”

In recent years, Kenya’s mainstream media has been under the microscope for apparent political biases that appear to influence their coverage of events and situations in the country especially in the post-2002 Kenya. During the days of the one-party state, the mainstream media chose to press a self-censorship button and often swallowed hook, line and sinker whatever the government chose to disseminate.

Those who stood up against the system such as Society magazine’s Pius and Loyce Nyamora often suffered the brunt of official crackdowns on what was then defined as seditious publications.

Even big players such as The Standard and Daily Nation often chose to play safe rather than provoke the ire of both founding President Mzee Jomo Kenyatta and his successor Daniel arap Moi, who perfected a police state in the country.

Recently, long-serving journalist Macharia Gaitho admitted how the government used to disseminate “news” regarding false subversion activities of its opponents. Daily Nation’s low moment, he said, was when it went to town with a splash headline that radical politician J.M. Kariuki had secretly travelled to Zambia based on an official feed while, in fact, he had been assassinated and his remains dumped on Ngong Hills.

READ: The Kenneth Matiba pleaded to kill a story in his own newspaper

After intense local and international pressure, amid a sustained crackdown on pro-multi-party activists that saw many of them detained or forced into exile, Moi, in 1991, went against the KANU grain and agreed to the abolition of Section 2A, which had made Kenya a de jure one party state in 1982.

But if the media thought it had similarly been liberated, it was wrong. The Moi regime continued to bind and blind most journalists and editors and in addition upped dissemination of propaganda through Kenya Broadcasting Corporation (KBC) and the defunct Kenya Times, via its KANU briefs segment that was run by, among others, pro-system scholars such as the late Prof William Ochieng.

So much so that when former Vice President Mwai Kibaki surprised the system by defecting from KANU to found the Democratic Party of Kenya, Kenya Television Network (KTN) found itself in trouble when it broke the news of its formation.

Shortly after, Matiba, who ran for the presidency on a Ford-Asili ticket after breaking ranks with Odinga, but claimed he was rigged out by Moi was forced to found his own newspaper, The People weekly (now People Daily), after his attempts to place an advertisement in the mainstream media were refused for fear of reprisals.

[dropcap]I[/dropcap]n 2002, however, the Kenyan media was more than happy to see the KANU regime exit after defectors from KANU led by Raila Odinga ganged up with the majority of the Opposition to back Mwai Kibaki for the presidency on a National Rainbow Coalition (Narc).

At Charter Hall in Nairobi, Electoral Commission of Kenya chairman, the late Samuel Kivuitu, was taken aback when journalists covering the final announcement of Kibaki as the winner of the historic contest that pitted him against Moi’s favourite candidate Uhuru Kenyatta, were overwhelmed by joy.

“Even you journalists are clapping?” he quipped.

Moments, earlier, Kivuitu had been saved from angry Narc youths by, among others, Raila, after he declined to declare Kibaki the winner even after Uhuru had been asked by Moi to concede defeat on account that he had not received physical forms of results from constituencies.

However, in the lead-up to the 2007 General Election, media houses and individual journalists once more begun to take sides.

This began with the push for comprehensive constitutional reforms following Kibaki’s refusal to appoint Raila as Prime Minister in line with a pre-election agreement, leading to a fallout in the NARC government.

This marked the beginning of a reactivated post-Moi era propaganda machinery that saw journalists disseminate stories that favoured the side they were aligned to. At the time, online dissemination of news was taking root.

In the post-2007 crisis era, however, the media appears to have dug its own grave by not only deliberately supporting the side they are aligned to but by also opting to embed journalists in those groups based on ethnicity or apparent political leanings. Some journalists have even been kicked out of newsrooms thanks to political pressure.

Some observers have raised concern why only particular journalists are tasked to cover particular political parties and politicians clearly marking them out for profiling by news consumers. Just like in the military and security services, embedded journalists run the risk of being influenced to adopt particular stances and in the process undermine their professional ethics.

They are unlikely to be neutral observers of particular situations because apart from covering public media events, they are wont to wine and dine with the news makers late into the night before sauntering into newsrooms in the morning armed with “exclusive stories.” They also publish or influence publication of propaganda comments favouring their sides.

“Whatever a patron desires to get published is advertising; whatever he wants to keep out of the paper is news.”

The above sentiment is expressed in a little framed placard on the desk of L. E. Edwardson, day city editor of the Chicago Herald and Examiner in 1918.

To his credit, Raila is among the few politicians who have never sued the media even when subjected to coverage that borders on libel and defamation.

While Business Today does not condone violence against journalists, media managers must reflect on how they set up their news operations to avoid endangering the security of the staff. As KTN’s Chris Thairu posed following the attack on Gachuri and Gatwiri, what would happen if an Ochieng goes to cover a function in Central Kenya and he is picked out simply on the basis of his surname?

The situation is compounded by the fact that most journalists who have left the mainstream media to become communication managers in political formations and county governments are often chosen on account of their political leanings and ethnicity.

While Gachuri admits that ODM Communications Director Philip Etale was instrumental in securing his escape from the “uninvited” hooligans, many have pointed out that he cannot entirely escape blame as he has been at the forefront in castigating mainstream media coverage of the ensuing political dispute often referring to them as “githeri media.” Individual journalists have also been recklessly making political pronouncements on social media.

It brings to mind, US President Donald Trump’s criticism of the media, which he variously refers to as “crooked and fake” because of its coverage of his far-right positions on various issues and how the media reacts to them.

READ: Gina Din Kariuki opens up on her struggles

His attacks on individual journalists have similarly raised concerns as to whether they do not endanger their security.

Back at home, President Uhuru Kenyatta and his deputy William Ruto have never hidden their disdain for the media, referring to newspapers as only fit to be “meat wrappers.” This despite the fact that both are now key media owners.

Going forward, media houses need to redefine how they intend to cover political situations in the country as well as how journalists conduct themselves on social media and whether it has any impact on their professional postures.

Regulatory and professional bodies must also be consistent on how they handle every emerging situation. In the absence of that, journalists such as Gachuri, who has been one of the soberest political reporters in the country, are likely to find themselves in unnecessary trouble.

SEE: Why journalists mourned death of a popular watering joint in Nairobi

It’s Not Alright, Mr Ruto. What Happened To You Is Wrong!