The image posted by award-winning Kenyan photographer, artist and activist Boniface Mwangi shows President Uhuru Kenyatta gesturing and claims he is pointing at the “vastness of Kedong ranch which his family owns.” Beside him is ODM party leader, Raila Odinga.

Kedong Ranch Ltd, is a privately owned ranch in the heart of Naivasha, the tourist town in Nakuru County. It has 23 shareholders, including members of the family of President Uhuru Kenyatta, according to the International Federation of Human Rights (IFHR).

President Uhuru Kenyatta pointing out the vastness of Kedong ranch which his family owns. One day some universities will offer a masters in "State Capture" and the Kenyatta family will be a case study. pic.twitter.com/izhgAkXCgm

The Observer, a digital magazine run by the Media Council of Kenya, was the first to flag the photo as misleading as seen in the image below. 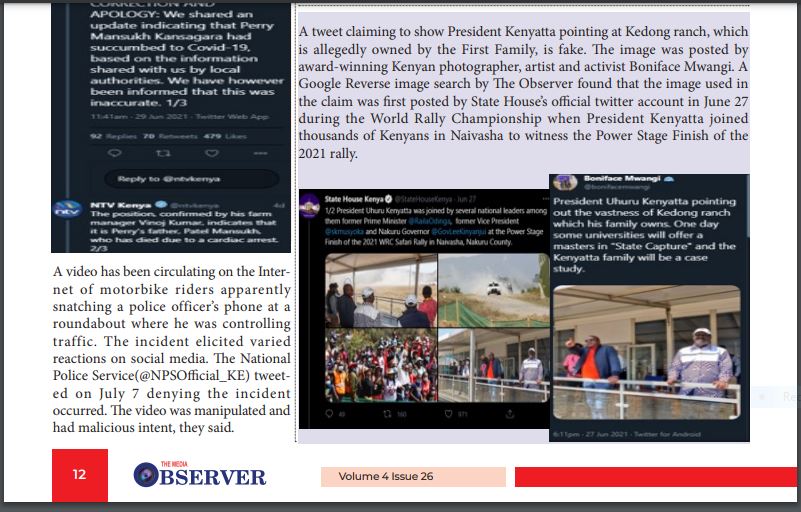 A Google Reverse image search shows that the image used in the tweet was first posted on State House official Twitter account on June 27th during the World Rally Championship when President Kenyatta and Raila Odinga joined thousands of Kenyans in Naivasha to witness the Power Stage Finish of the 2021 rally.

While the President’s family has a stake in Kedong Ranch, on the occasion captured in the photo, he was attending the conclusion of the WRC race in Naivasha.

VERDICT: The picture shared on Twitter and caption depicting President Uhuru Kenyatta pointing at Kedong ranch is MISLEADING as it was captioned out of context.

Next Read >> How Public Was Misled With Fugitive Police Surrendering

AfCTA: New Business Opportunities Where Kenyans Are Cashing In