Presbyterian University of East Africa has found itself between a rock and a hard place after a majority of its students declined to transfer to two universities that PUEA had proposed as the church sponsored varsity begins the process of formally winding up.

Some students told Business Today that they have flatly rejected the chance to join Mt. Kenya University (MKU) and University of East Africa Baraton, Eldoret. According to the students, the two private institutions are not attractive propositions to them and they are seeking to join public universities instead.

This poses a dilemma for the Kenya Universities and Colleges Central Placement Service (KUCCPS) which had allocated the government sponsored students slots at PUEA.

It raises the question whether KUCCPS did due diligence before placing the students at PUEA including gauging the financial health of the institution and welfare of the already existing students before making their move.

The new revelations come two days after Business Today reported that PUEA had began the process of transferring some of its students to MKU.

In response, PUEA Acting Vice Chancellor John Mungania wrote to students and staff on October 18 terming the report by Business Today as “misleading” and stating that the new semester had began and that “learning is going on smoothly”.

However, sources at PUEA have confirmed to Business Today that a number of students had agreed to join MKU as others declined in the credits transfer saga.

Business Today has also seen a transfer letter request sent by a student to KUCCPS through the Office of the Ag. Vice Chancellor which was received by the placement service and approved by MKU. 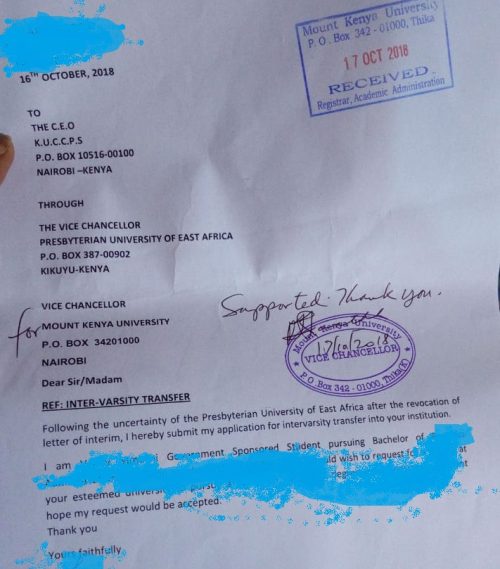 One learner at the varsity who spoke under anonymity said that it is true that the university is transferring students and that the student had rejected to join MKU or Baraton.

“I prefer to join a public university at the moment. Right now, I want to go to a University that offers stability so that I can concentrate on my studies,” said the student.

The learner also told Business Today that since former Acting E*******n Cabinet Secretary Fred Matiang’i ordered the Comission of University E*******n (CUE) to start the process of winding up the varsity on January 25, Ag. VC Mungania has strategically avoided being seen at the main campus in Kikuyu.