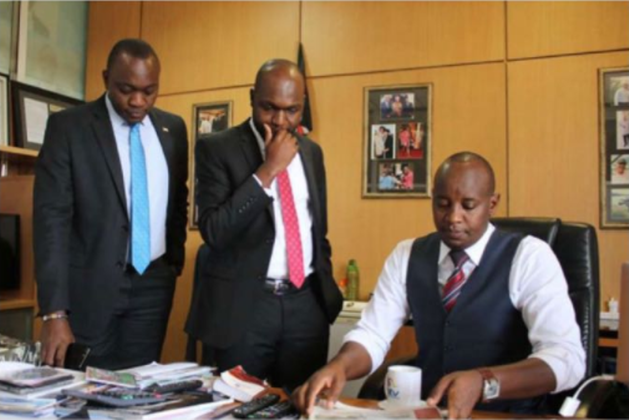 NTV General Manager Linus Kaikai was earlier set to face a****t as the crackdown on media houses that defied government orders not to provide live coverage of the NASA event at Uhuru Park ensued.

According to sources, the special team of officers from the Directorate of C******l Investigations arrived at Nation Centre on Wednesday evening seeking to a****t Kaikai. KTN News, Citizen TV and NTV are currently off air on free to air and paid for platforms.

Kenyan households are still going without their favourite television stations a day after court ordered that private stations be allowed to resume broadcasting. Many Kenyans expected the TV channels to be back on air immediately but several hours after the order the screens are still blank.

The government through the Communications Authority of Kenya shut down KTN, NTV and Citizen Stations on Tuesday over broadcasting symbolic swearing-in of opposition leader Raila Odinga as the people’s president.

The Interior Cabinet Secretary Fred Matiang’i termed the National Super Alliance events at Uhuru Park on Tuesday as a well-choreographed attempt to overthrow a legally constituted Government of Kenya. In an address to the press, Matiang’i accused some media personalities of furthering the i*****l act despite directive baring them to air Raila Odinga’s ‘swearing-in’ ceremony.

On Thursday Justice Chacha Mwita directed Interior CS Fred Matiang’i, his ICT counterpart, Joe Mucheru, and the Communication Authority of Kenya (CA) to immediately restore the signals for the media outlets until a case filed by activist Okiya Omtatah is heard and determined.

Justice Mwita also stopped Matiang’i, CA, or any other government authority from interfering with all television transmissions by the Standard Group, Royal Media Services, and Nation Media Group.

“I am satisfied that the petition raises serious legal and constitutional issues that require immediate intervention by the court. I therefore issue orders for the respondents to immediately restore all television transmissions pending determination of the case,” ruled Mwita.