The photo of a pregnant Alysia Montana, the US 800m athlete has been trending just after the conclusion of the Tokyo Olympics.  The photo shows her competing in a race captioned thus, “Driven by passion, United States athlete, Alysia Montana, five months pregnant, participated and won the 800 metres at the US nationals.  Nothing beats determination. Pamoja Mbele.” 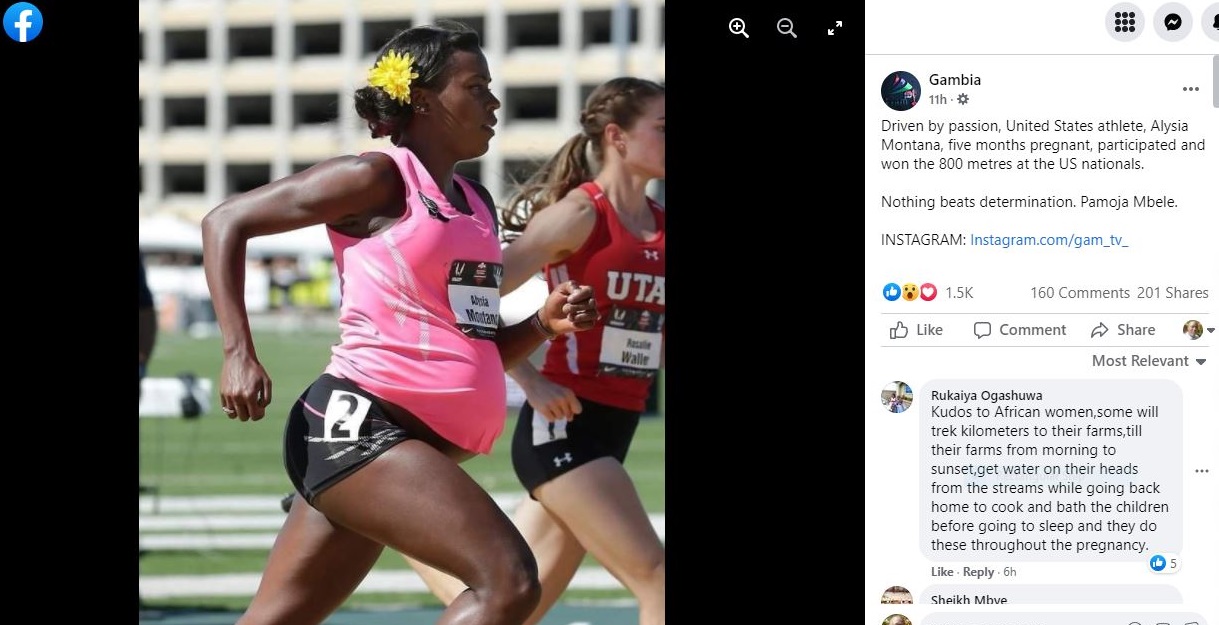 This photo has gone viral with a number of Facebook users sharing it including the following Gambia, Sammy Gikeno, Anne Lawrence and afromambo.com, among others  . Business Today went out to fact-check on the photo and found that the photo is authentic but the caption does not give full details of when and where it was taken. This creates the impression that she participated at the latest US Track & Field Championships or even the just-concluded Tokyo Olympics.

A Google reverse search of the image shows it was actually taken by Associated Press photographer Rich Pedroncelli on 26th July 2014 during the US Track & Field Championships.

This is the day Alysia Montana, while 34 weeks pregnant (or nearly eight months) with her first child, competed in the 800 meters race. Then a five-time national champion, she finished in two minutes, 32.13 seconds – nearly 35 seconds slower than her personal best of 1:57.34 in 2010 in Monaco.

Then 28 years old, Ms Montana finished last in her heat at Hornet Stadium. Trailing the lead pack by more than 120 metres for most of the race, ESPN.com reports that Montano received a rousing ovation as she finished her first lap and when she finally crossed the finish line.

“I’ve been running throughout my pregnancy and I felt really, really good during the whole process,” Ms Montano is quoted by ESPN as saying after the qualifying heat. “I just didn’t want to get lapped and be the first person to get lapped in the 800.”

Ms Montano says she ran after consulting with her physician, who not only gave her the okay to run but also encouraged her. “What I found out mostly was that exercising during pregnancy is actually much better for the mom and the baby. … I did all the things I normally do … I just happened to be pregnant. This is my normal this year.”

Three years later, in 2017, the American athlete competed again at the US Track & Field Championships while five months pregnant with her second child. Then 31 years, she ran two laps and finished 19 seconds behind the winner, time record of 2 minutes, 21.04 seconds. She is reported to have finished last out of the 30 sprinters, but left an impact with her baby bump on display. 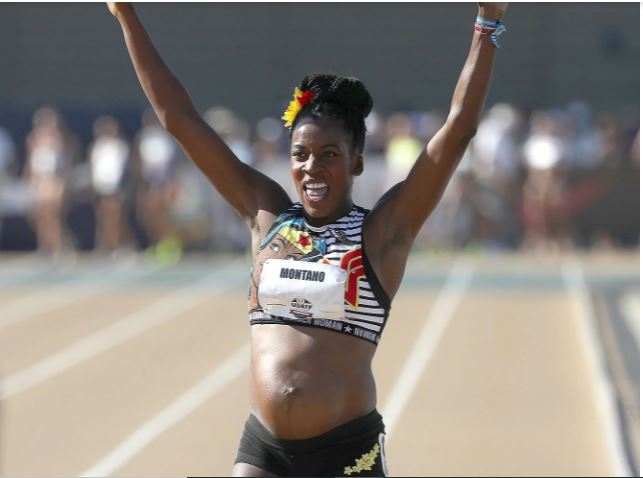 She stated after the race that she competed while pregnant as a way of empowering pregnant women against the stigma that pregnant women should not exercise when expecting.

VERDICT: The photo of Alysia Montana currently doing rounds on Facebook is partly true to the extent that it captures one of her moments competing while pregnant, but the caption is FALSE as it gets the occasion she competed in wrong.

Next Read >> Will The Real Jonathan The Tortoise Please Stand Up

Young Kenyan Basketball Players To Win Scholarships To US

Should Qualifying For The World Cup Be As Hard As It Is For African Teams?