NRG staff prepare to cut a cake to mark the launch of two new stations, Choice Radio and Fun X.

However, speculation that the station was to be acquired by Virgin Atlantic billionaire Richard Branson did not materialise.

After months of a healthy pregnancy, we are pleased and thrilled to announce the arrival of our new babies @FunXCoolKE and @ChoiceRadioKE who joined the family at exactly 2:10 am this morning. We cannot wait to share this journey with the 2 new babies. #NRGBabies #NRGAMShow pic.twitter.com/TKMHqk6vcW

Fun X is available on 91.3FM, the frequency on which NRG Radio has been broadcasting, while Choice Radio is accessible on 87.7FM.

Choice Radio is targeted at an audience aged 30 years and above with urban, grown and sexy content that the audience will find hard to turn off.

“The Radio’s playlist will be loaded with a head-nodding mix of old school and timeless hits,” Group Digital and Communications Lead Beverlyne Wangari said in a statement.

FunX as the name suggests will seek to cater to the needs of the modern, fun-loving teen aged between 13 and 17. The music will as such be the epitome of Edgy, Fun and Adventurous – the perfect package for the dynamic teenager, FunX represents the new centennial audience.

On the other hand, NRG Radio will cater for those aged between 18 and 30 years.

“This is an exciting milestone because we can now cater to the varying needs of our audience and listeners across the age spectrum,” Wangari said.

NRG (Energy) is owned by Kevin Mulei, the Founder of M0Sound, an event planning, production, and management company based in Kenya with operations across East and Central Africa.

NRG Radio which just celebrated their 1-year anniversary has witnessed commendable growth. Crowned the radio digital king in town last month –  given their leading social media numbers, visual and engaging content, their growth has shaken the market with their multi-platform radio model being an admiration of many.

It is the first visual radio station in Kenya and Africa and has become a key benchmark for most media houses across the region. The station also recently launched an Eclectic, Disruptive, Highly Customized and Engaging Mobile App – NRG Play which is a totally immersive mobile experience. The App is Now available on Android and iOS and also houses FunX and Choice Radio.

The two ‘babies’ will be the ultimate compliment to the ‘Mother Station’-NRG Radio. 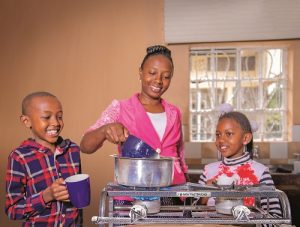