Nation Media Group, Kenya’s leading media house, has ruffled its employees ahead of the Christmas month after announcing a plan to implement changes that will be ‘unsettling’. In an inhouse circular, Group CEO Stephen Gitagama said the recent shift in the company’s operational strategy geared at accelerating growth had necessitated “extremely difficult decisions,” which will include some of its employees losing their jobs.

“Regrettably,” Mr Gitagama says in the memo dated 30th November, 2022, “this refocus will result in a reorganisation of our workforce. This is an extremely difficult decision in view of the prevailing business environment.”

This is a turnabout from the recent meeting’s tone at which management sought to assure employees that while there would be structural changes as NMG sheds a bit of its analogue mien, no one was going to be fired. At the early November meeting, NMG announced changes to accelerate its business transformation agenda to assure success in the long term and the sustainability of its journalism.

Mr Gitagama says NMG will continue to refocus on priority areas to deliver on the transformation while adequately resourcing and placing staff into areas where their skills are best utilised. In other words, square pegs currently fixed in round holes will be tossed out.

A month later, and as the reality sinks in, NMG management has its scalpels out to trim fat from its operations. The CEO said the layoff, now an annual ritual premised on the cliched ‘transforming business’ goal, will be carried out with utmost dignity and in accordance with the law. “We will strive to provide all the necessary support to help those affected manage the transition,” he said.

Like Standard and Radio Africa, NMG is not immune to the shifting dynamics in media, where consumption of new and advertisements has moved heavily online, shaving a huge chunk of revenues from conventional media.

Mainstream media have been struggling to wean themselves off fledgling banner revenues as ads follow social media forums like Facebook, Whatsapp, Instagram and Twitter, all foreign-owned. Media revenues have been badly dented with drops in profitability and Standard Group even recording losses.

It attributed the decline in profitability to factors including a ‘drastic’ rise in the global prices of newsprint paper, disclosing that the costs were up over 100% compared to the previous year. The company also cited the weakening of the Kenyan shilling against the dollar driving up the cost of imported raw materials. It is likely headed for a disappointing full-year.

Standard Group has already given notice of redundancies. At NMG, management has served the bad news and is set to issue letters any time. The strategy of announcing redundancy and holding for a month or more before effecting the layoff has been criticised for causing panic among staff. Moreover, the best people exercise their option and leave, just like it has recently happened to Standard Group.

Recent redeployments of Mutuma Mathiu from editor in chief to consulting editor and Bernard Mwinzi from Managing Editor Daily Nation to value-added content has already set the tempo for the expected changes. From the CEO’s tone, the restructuring could mean either unlikely people will leave or the layoff could come in big numbers.

“While these changes maybe unsettling,” Mr Gitagama says, “I am confident that we are collectively moving in the right direction. I therefore call upon each one of us to embrace the changes and champion our mission as we build the NMG of the future.” 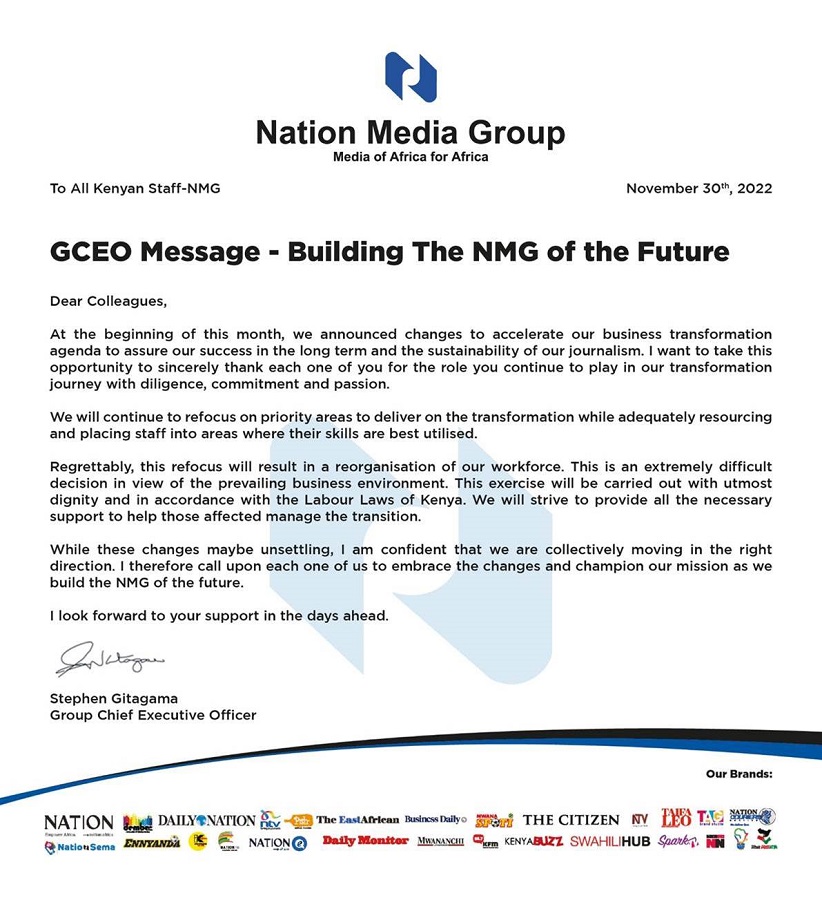 Next Read >> Top Citizen Presenters On Ruto’s Most Wanted List