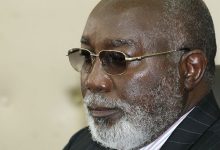 Former Kilome MP Harun Mwau. Nakumatt Administrator Peter Kahi has refuted claims that the retailer's woes ensued once the former politician pulled out of the company.

Former Kilome Member of Parliament Harun Mwau had no stake in Nakumatt and the retail chain’s painful collapse was not precipitated by the former politician’s alleged exit from the company, well at least according to Nakumatt administrator Peter Kahi.

In a phone interview with Business Today, Kahi said that the retailer’s books do not reflect any ownership by the former politician amid claims that investors who had expressed serious interest in injecting capital that would have bailed out the retail chain from its financial woes were put off by the stake held by Mwau who is under the radar of American authorities which accuse him of being a drug lord.

Kahi said in his interactions with former Nakumatt CEO Atul Shah, the latter maintained that Mwau was never an investor in the chain but had a ‘personal arrangement’ with the former politician in his private businesses.

“The records do not show any such thing. For the period I have been administrator, I have not seen anything that links Nakumatt to Harun Mwau. These are rumours,” Kahi told Business Today.

Reports indicated that Mwau owned 7.7% stake in the retailer worth billions of shillings by November 2016 when he sold it, at a time the company was in the hunt for a strategic partner to pull it out of the red.

The reports also indicated that Mr. Shah’s decision to buy out Mwau’s stake in the company with working capital was the genesis of the retailer’s downfall.

On Tuesday, creditors voted to liquidate the retailer in a session held at Visa Oshwal Centre in Parklands, Nairobi spelling an end to the chain that was the biggest supermarket brand in East Africa in 2017.

Kahi also confirmed that Kenyan authorities have traced Ksh3.6bn worth of assets linked to Mr Shah in Kenya and outside the country’s borders as creditors circle around to recoup as much as they can with a flurry of creditors, suppliers and landlords demanding Ksh38 billion from Nakumatt.

Investigators are also hot in the trail of assets owned by third parties that acted as guarantors to the huge pile of debt Nakumatt owes.

Collogne Investment Limited, Nakumatt Investment Limited, Park View Shopping Arcade and River View Plaza are some of the third parties whose assets could be seized with creditors targeting everything that can be sold in a bid to recover their money.

“The only third party whose assets not at risk of seizure is Creative Enterprise,’ added Kahi.

A document authored by the administrator lists properties owned by the third parties: a Ksh2 billion building in Nairobi owned by Collogne, Park View Shopping Arcade worth Ksh600 million, a plot in Westlands worth Ksh220 million owned by Nakumatt Investments Limited, a commercial building in Mombasa worth Ksh350 million and River View Plaza worth Ksh200 million.

A report released by independent auditor Randall Parker last week revealed that the retailer had dished out Ksh1 billion interest-free loans to its directors by the time it was placed under administration.

Mr Shah and his son were the directors of the company at the time the loans have dished out and Kahi confirmed as much. The former CEO has said he is unable to return the money since he is distressed at the moment.

“He says he is in a precarious position financially and is unable to return the money which would have been the best-case scenario when you factor in the situation at hand,” said Kahi.