Retail chain Naivas supermarkets expanded its footprint in Ngong, opening what will be its 55th store in Kenya on September 20.

The new outlet, located next to the main bus station in Ngong, is designed to serve the population of the fast-growing urban area. Naivas now has three outlets in Ngong town, having first ventured there in 2011 by setting up at the Juanco plaza.

Speaking during the official opening of the new branch, Naivas Chief Commercial Officer Willy Kimani explained that setting up in Ngong town was part of the firm’s broad expansion strategy to serve Kajiado County sufficiently.

Kajiado is estimated to have a population growth rate of 5.5 percent, with a total population estimated at 807,070 with 401,785 being females and 405,245 males based on 2012 county data. The population was projected to grow to 1 million by the year 2017, according to the county government.

Ngong’s population is estimated to be one-fifth of this, having doubled over the last decade since the 2009 census that placed it at just over 100,000 people.

“Ngong continues to post impressive growth as a satellite urban area of the Nairobi metropolis and with the ongoing expansion of both Ngong and Magadi roads, it is set to become even more accessible,” said Kimani noting that these developments will definitely lead to a higher population density as more people move to reside and conduct business there.

The new Naivas branch is designed as an express outlet to serve a target market that needs quick access to fresh food items and groceries with a relatively fast exit.

According to the retail chain, the Naivas philosophy is to meet customers at the points of their life where the firm can deliver the best value. This includes locations, product quality, range and a favorable ambience that gives shoppers a great retail experience.

The Ngong town branch comes close on the heels of the Qwetu residences store on Jogoo Road, that opened its doors in July and follows Naivas expansion journey. The retail chain has three kinds of outlets including hypermarkets located mainly in shopping malls, mini-stores. Each of these types of retail stores is designed and located with specific target markets in mind. 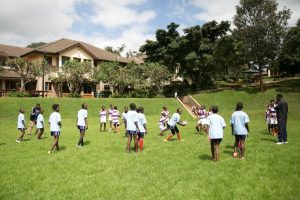