Nairobi has been named among the top 20 most dynamic cities in the world by Citi Research. The Kenyan capital is the only city outside of Asia Pacific ranked among the top 20. The other African city in JLL’s City Momentum Index is Lagos, Nigeria which came in at position 25.

“Only one city outside of Asia Pacific, Nairobi, ranks in the top 20 most dynamic cities in the globe – and even in Nairobi there is a strong Asian influence, with significant amounts of investment from China, particularly focused on infrastructure projects,” says Jeremy Kelly, Research Director at JLL.

He says although momentum in the global economy appears to have peaked, there are still many cities in the world where real estate and economic growth continue to be robust.

“At the time when the World Economic Forum is examining globalisation 4.0, JLL’s City Momentum Index, now in its sixth iteration, focuses on momentum for the world’s most commercially active cities,” adds Kelly.

Tracking a range of socioeconomic and commercial real-estate indicators to identify attributes for success over the short term, the City Momentum Index ranked 131 major established and emerging business hubs across the globe to identify the urban economies and real-estate markets that are currently undergoing the most rapid expansion.

This year’s rankings find the fastest urban growth continuing to shift away from the West to the East. Asia Pacific is home to 19 of the top 20 cities in this year’s index, and overall, Indian and Chinese cities dominate the rankings, accounting for three-quarters of the top 20. 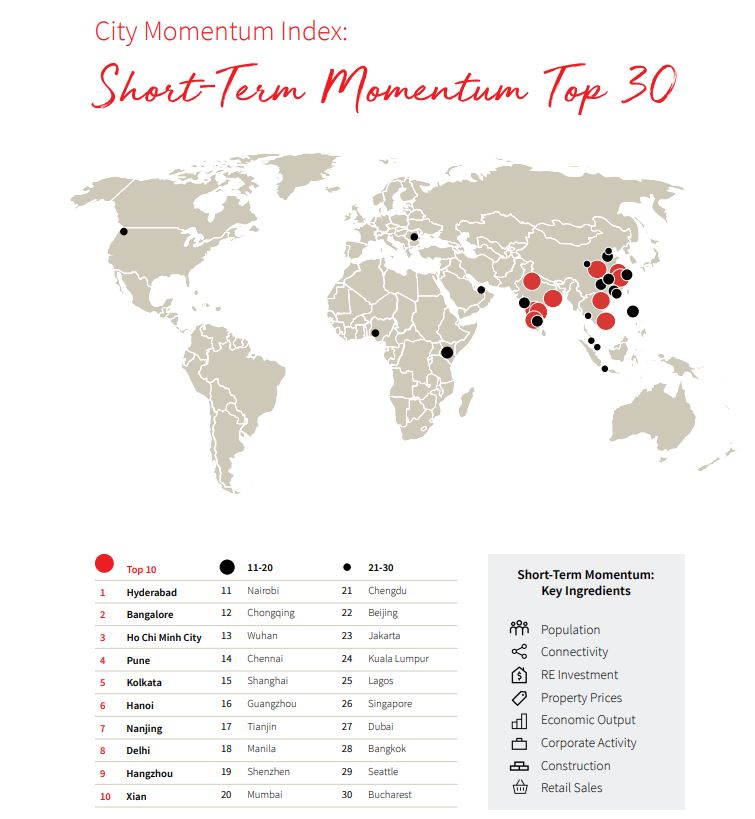 The CMI Short-Term Momentum rankings identify the urban economies and real estate markets which are currently undergoing the most rapid growth. They highlight the continued rise of Asia Pacific’s cities as destinations for global capital, commerce and innovation, with markets from the region accounting for 25 of the Global Top 30.

India maintains its pre-eminence in the Short-Term Momentum rankings with four of the top five markets, as its cities register among the highest rates of demographic and economic growth globally, while also benefitting from government efforts to boost business attractiveness and invest in infrastructure. The country’s leading tech hubs Hyderabad (1st) and Bangalore (2nd) take the two top positions, while Pune (4th) and Kolkata (5th) round out the top 5.

While economic energy is propelling India’s cities forward, they also exemplify some of the challenges facing markets with strong momentum, including strains on infrastructure and local amenities; high levels of inequality and affordability issues; and environmental degradation, which can all be compounded by a lack of planning oversight and transparency. In order to maintain their growth over the longer term, these cities will need to focus on future-proofing their markets through improved liveability and affordability, regulatory transparency and physical and technological infrastructure.

Chinese cities show no sign of diminishing momentum, accounting for 11 of the Global Top 30. China’s ‘Powerhouses’, which are firmly integrated into global production networks and engines of the national economy – Nanjing (7th) and Hangzhou (9th) – are the top performers, boosted by their shift up the value chain. They are joined by markets with a strong talent base which are becoming global leaders in technology and advanced manufacturing such as Guangzhou (16th) and Shenzhen (19th), while China’s ‘Established World Cities’ Shanghai (15th) and Beijing (22nd) remain among the world’s most dynamic markets, supported by a raft of innovative, ‘next generation’ corporations, rapidly-developing infrastructure and educated workforces.

The Vietnamese cities of Ho Chi Minh City (3rd) and Hanoi (6th) are attracting sizeable volumes of foreign direct investment (FDI) as they integrate into regional and global supply chains for high-technology manufacturing. This is helping to spur rapid economic and income growth, leading to among the world’s highest rates of increase in retail sales and air passenger numbers.

Asian ‘Megahubs’ which act as regional gateways and have the scale to compete for talent, visitors
and innovation – including Manila (18th), Jakarta (23rd), Kuala Lumpur (24th) and Bangkok (28th) – are continuing to drive forward on the back of significant economic momentum. Offering substantial growth potential, these cities are key expansion markets for many corporates and are drawing particular interest from Chinese companies as they internationalise. They also have some of the highest levels of real estate completions across the globe as they build out the infrastructure to service this demand.

End of the NMS Era as Sakaja Takes Over City Hall