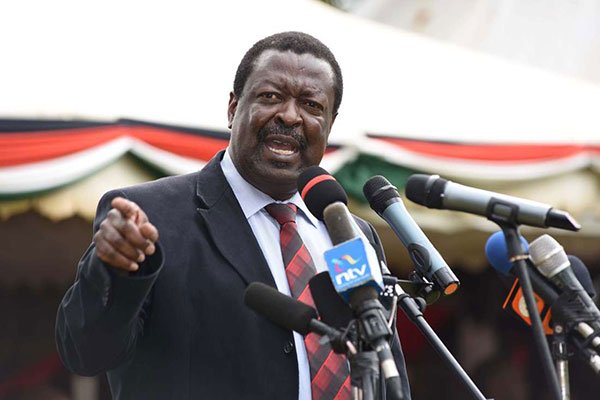 Amani National Congress (ANC) Party Leader Musalia Mudavadi. He has been lauded for his speech at the launch of the BBI report at the Bomas of Kenya

The Building Bridges Initiative (BBI) report is finally out, it contains far-reaching recommendations mostly revolving around the country’s governance system and thorny issues pricking a large majority of Kenyans.

Contrary to initial reports, the BBI recommends retaining an Executive President directly elected by the people with a Deputy President as his principal assistant but introduces the positions of Prime Minister and Leader of Opposition.

The President will be Head of State and Government, Commander in Chief of the Armed Forces and Symbol of National Unity.

Most Kenyans have pointed at the pure presidential system as the genesis of all the problems bedeviling the country as it is premised on a winner takes all ideology.

The Positions of Prime Minister and Leader of Opposition are tailored to cure that problem.

The Prime Minister according to the document will be nominated from Parliament by the president and his/her appointment must be approved by the National Assembly. The Premier must also prior to his nomination must be an elected member of parliament.

The Prime Minister will be the leader of government business in parliament and will chair cabinet sub-committees as directed by the president. The Premier will control and supervise day to day operations of the government.

The Leader of Opposition will be the runner up in a presidential election and has been tasked with holding the government to account through the formation of strong opposition and a shadow cabinet.

One major observation about the BBI report is that it is awfully specific about leadership positions but very general about real issues affecting Kenyans.

This argument is shared by Amani National Congress (ANC) leader Musalia Mudavadi who fell short of saying that the BBI is driven by political interests during its launch on Wednesday at the Bomas of Kenya.

“My understanding is that BBI is bigger than sharing public positions. So that can we focus as Kenyans and let us all interrogate and Your Excellency, the economy, what is ailing us? the economy,” said Mudavadi.

Over the past six years, as Mudavadi points out, Kenyans have been exposed to tough economic conditions as the government embarked on an uncontrolled borrowing spree that has sunk the country into a Ksh6 trillion debt expected to hit Ksh9 trillion debt before 2022.

Rosy economic growth projections have not been well received on the ground with most Kenyans opining that they haven’t felt the impact of the grandiose with no food on their table.

Zero successful convictions of corruption suspects have cast a dark cloud on Kenyans’ belief that the corruption cancer can be tackled.

Conversely millions of Kenyans stay unemployed with their prospects dampened by a grim economy. A report by the Federation of Kenya Employers (FKE) shows that graduates are now accepting clerical and menial jobs despite having degree certificates from recognised universities in Kenya.

A lot of frustrated youth have taken to the street displaying placards begging for employment while President Uhuru Kenyatta keeps appointing the old guard to plum government positions.

What Next After BBI?

When Jimi Wanjigi emerged from his bunker on October 17 after the siege on his palatial Muthaiga home, one statement he uttered confirmed what most Kenyans know but refuse to accept, that Kenya is not a pure democracy as sold to the citizenry but rather a nation where the political elite run supreme and lobby amongst themselves who will ascend to the presidency.

Jimi Wanjigi who was at odds of the ruling coalition at the time revealed how the Jubilee Government was formed at his mansion and how he played a major role in asking former Prime Minister Raila Odinga to concede defeat after he was beaten in the 2013 election by President Uhuru Kenyatta.

“This current regime of Uhuru Kenyatta knows my home. It is a home they have visited and shared meals with my family. In fact, their government was formed in this home,” Mr Wanjigi said.

In an interview with Citizen TV on July 2, 2017, Deputy President William Ruto also revealed how himself and President Kenyatta attempted to entice Wiper Party Leader Kalonzo Musyoka to join the Jubilee Coalition in a meeting attended by Wanjigi at the former Vice President’s home.

See Also: What The Next constitution Must Adress