Anthony Wambua using his laptop. He has gone against all odds to learn how to code using special technology. Photo/Havas Africa

Kenya still has a long way to go before every individual can get equal opportunities especially for the physically disabled.

For years, the physically challenged have had difficulties trying to get opportunities for jobs and education. Quite a number of them are reduced to beggars on the streets as that is the only option available to them for making ends meet.

However, few of them have plowed through the hardships to earn themselves better opportunities. One Anthony Wambua is one of the differently-abled persons who refused to be reduced to a beggar on the streets.

Wambua, who hails from Machakos County, has gone against all odds to become the first blind Kenyan computer programmer. For many years we have known it to be impossible for a virtually impaired person to use a computer let alone learn how to code.

Having being born normal, Wambua faced many challenges when he started losing his sight at the age of 8. He had to give up school as he could not attend normal schools and there were no special schools around.

“I stayed at home for six years without stepping foot in a school. After I got a chance to join school I still was facing financial challenges,” Wambua told a Business Today reporter. He went through his primary education thanks to the support he got from his mother.

Wambua is born of a single mother and grew up with his older sister. Things could not be worse for him as he lost his mother and only parent when he finished primary school. He struggled to find financial support for his secondary school education.

It is at this time that Wambua stumbled upon inAble, a nonprofit organisation with a mission to empower the blind and visually impaired through computer technology. The organization saw to it that Wambua joined the Thika High School for the Blind.

The opportunity was a gold mine for Wambua and he indeed treated it as such. The school is one of the seven schools in Kenya that have been bolstered with computer technology for the blind. Wambua used this opportunity to learn how to operate a computer and even went further to learn more about it.

He is on the verge of becoming the first-ever blind coder from Kenya as he has been slowly improving his coding skills. Having finished his high school education, Wambua took it upon himself to learn how to code using the technology donated by inAble.

How He Does it

The question that puzzles anyone who hears about Wambua is how he does it? Well, the technology that allows the blind to use a computer is the same one that Wambua uses to code.

Wambua uses a normal laptop with normal keyboard keys. To enable people like Wambua to use the computer, the laptop is fitted with a screen reader. There are instructors who teach the students how to use a screen-reader and be able to use the internet.

InAble has been the organization that has pulled the strings to have these students and pupils get the opportunity to learn these skills. In 2017, the organisation signed a memorandum of understanding with iLab at Strathmore University to support instructor training.

Wambua lives to be forever thankful to inAble for giving him an opportunity to compete in the free world with the physically abled. He started learning how to use a computer in 2009 nad has a dream to become one of the best computer programmers in Kenya. 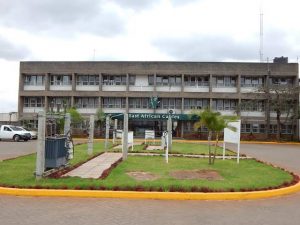