Bilha Ndirangu. Africa's Talking CEO. The company has been ranked as one of the most promising companies in the continent.

Sixteen Kenyan companies have achieved major milestones in their growth journey in the space of one year enough to warrant the attention of global investors keen on splashing their cash to tap their potential.

The sixteen companies were part of the 360 firms featured in the Companies to Inspire Africa, a report published by the London Stock Exchange (LSE) in January 2019 in an attempt to  to raise awareness in emerging markets of the massive investor base that exists in the United Kingdom.

One Year On, Companies to Inspire Africa 2019, another report co-authored by LSE and audit firm PricewaterhouseCoopers (PwC) which tracked the growth of the 360 African companies between January and December 2019 shows that a total of 85 companies in the continent had made tremendous progress with Kenya producing the second-largest number.

According to the report, 28 companies out of the 85 across the continent received additional financing raising over USD1.4 billion (Ksh141.2 billion) either through completing an Initial Public Offer (IPO) or issuing a bond on their domestic or a cross border exchange. Some secured investment from financial and strategic investors during the course of the year.

Conversely, some of the 85 companies raised USD4.1 billion (Ksh413.6 billion) in debt capital markets over the course of the year.

“The achievements of these inspirational businesses also tally with LSEG’s experience in African and international markets. There are now 112 African companies listed in London, with an aggregate market capitalisation of $161bn. Over $22bn has been raised by these firms in London since 2008. Furthermore, London’s debt capital markets have over 50 active bonds from 14 African issuers, having raised $55bn,” says Nikil Rathi, CEO LSE in the PwC authored report.

Some of the Kenyan companies that benefitted from this financial innovation include;

Africa’s Talking is a Pan-African technology company headquartered in Nairobi which aims to help software developers and businesses build solutions by democratizing access to technology infrastructure.

The company has developed strong partnerships with over 30 telcos and banks in Africa to open up their infrastructure to software developers through easy to use APIs (Application Programming Interface).

The platform enables developers to incorporate communication and payment APIs into their solutions, enabling them to reach their customers when they need to.

Software developers can choose from a wide range of APIs including SMS, Voice, USSD, Payments and Airtime.

In April 2018, the tech firm received USD8.6 million (Ksh860 million) Series A funding to boost its operations.
The company’s CEO Bilha Ndirangu in the report said expanding into Francophone and Southern Africa, product diversification and innovation are the factor behind the company’s strong growth.

Adele Dejak is an established jewelry and fashion accessories brand based in Nairobi owned by fashion entrepreneur Adele Dejak.

Designed and handmade using reclaimed and recycled materials from across the African continent, Adele Dejak Ltd’s affordable luxury brand has picked the interest of fashion and style icons worldwide.

It prides itself on working with the best local artisans – those with the skills and experience to work with materials in the most innovative and creative ways.

Their designs integrate locally sourced materials and traditional designs with a modern European style. Their inspirational designs begin with research on shapes and textiles from photos, artwork, books, and magazines on Africa and African tribes.

Proceeds from Acorn’s bond will provide financing for the construction of climate-resilient student accommodation in the Kenyan capital Nairobi.

In 2006, the company added property development capabilities and began undertaking its own developments.

In 2015, Acorn Holdings Limited was formed together with leading Africa-focused private equity firm Helios, and the business refocused purely on developing and managing purpose-built rental accommodation for young people in Nairobi.

Currently, Acorn is developing and managing purpose-built student accommodation with 1,600 operating beds and over 10,000 beds under development.

“The population of the city (Nairobi) currently stands at 4.5 million and is projected to exceed 6 million by 2030, putting a strain on urban infrastructure, including affordable housing,” says Mr. Kirathe in the report.

Twiga Foods
The Nairobi-based agricultural company is also on the radar of global investors.

In October 2019, the company secured USD30 million (Ksh3 billion) from lenders and investors.

The money was to be used to set up a distribution centre for both agricultural and FMCG products.

“This funding enables us to invest in our technology and organisation to tackle the inefficiencies in Africa’s domestic food production and distribution ecosystems,” said Twiga Foods CEO Peter Njonjo in October 2019. 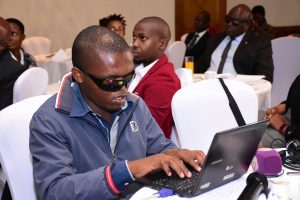 Blind But Farsighted: Meet Kenyan Visually Impaired Software Programmer
Wambua, who hails from Machakos County, has gone against all…