Media Internships: Media and communication students must be sighing with relief after the Media Council of Kenya announced a deal with undisclosed media houses to not only provide internships but also get them paid.

The Media Council of Kenya (MCK) says it has partnered with recognised media houses to roll out the internship programme for the Financial Year 2021/2022 to offer journalism students practical work experience before graduation and prepare them for the job market.

The internship will be for a period of three months, with the Media Council of Kenya providing up to Ksh15,000 for the trainees’ upkeep. The council did not, however, disclose the number of students it can accommodate in the programme nor how it will fund the stipend paid to interns.

“The programme will offer internship placement opportunities to journalism students across the country starting December 2021,” MCK said in a statement, which which is widely being praised by colleges and students.

Getting internship in media houses has been about as hard as getting the real job itself as the market gets flooded with journalism students. The situation has often been complicated by nepotism by media managers.

The high demand for internships has also opened avenues exploitation of desperate students. In September Ebru TV started charging journalism students seeking attachment at its newsroom. Ebru TV advertised the three-month incubation programme for students in need of attachment or internship in a media-related field.

In a statement released on 14th September , the media house announced that the slots were limited and those interested were required to pay Ksh15,000 upfront.

>> Media Houses Spoiling For a Fight Over Talent Ahead Of Elections

Meanwhile, beneficiaries of the MCK internship programme will be placed in recognised media organisations under the following areas of specialization: Editorial, Radio, Television, Digital and Corporate Communications. Individual journalism students who meet these requirements are eligible to apply, while universities or middle-level colleges teaching journalism and media studies are also eligible to apply on behalf of the students.

Interested journalism students or universities and middle – level colleges can submit an application letter together with the other requirements to: [email protected] with the subject title: ‘Application for MCK Industrial Placement Programme’ on or before Friday, 12th November 2021. Applicants should clearly indicate their preferred regions and media houses even though placement will be at the discretion of the Council.

Read >> Nine Prestigious Careers You Can Get In Kenyan Media 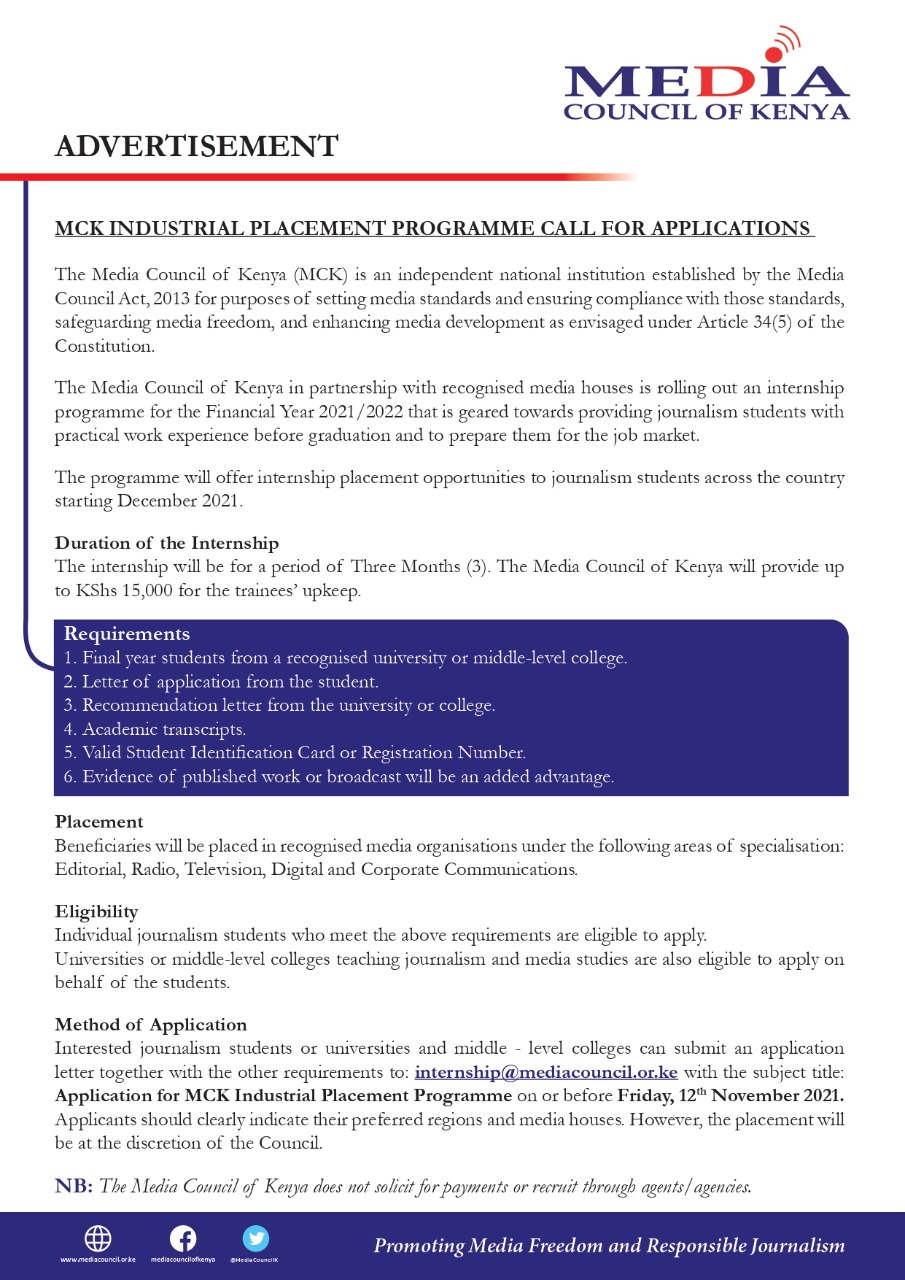