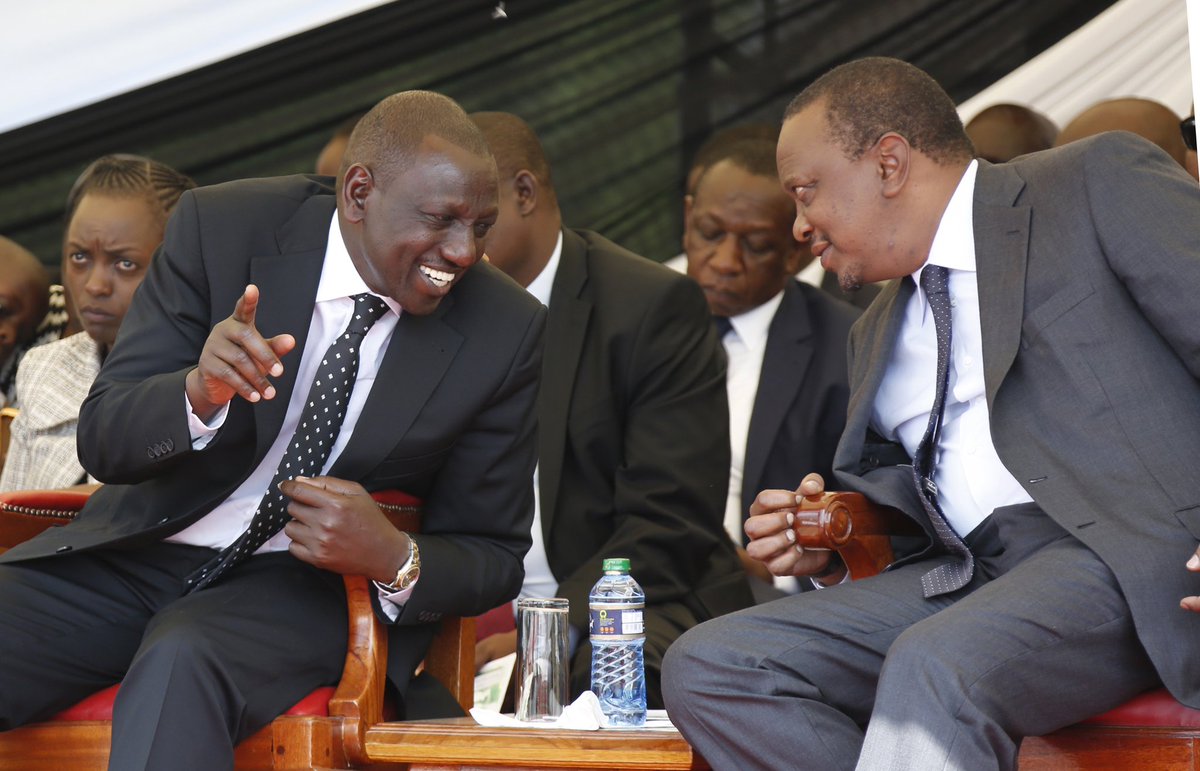 President Uhuru Kenyatta and his deputy William Ruto. Questions linger over most wealthy families calling the shots in politics over how they made the money. [Photo/Madam Magazine]

As millions of Kenyans continue wallowing in poverty, a handful of others are swimming in billions of shillings and eating life with a big spoon.

Despite these big numbers being thrown about by the IMF, only a few people can enjoy the so-called economic growth.

According to the Forbes magazine, there is not a single dollar billionaire in Kenya as yet but those who feature as the richest Kenyans have appeared severally as their wealth keeps growing.

The country has fast become a money launderers’ paradise as the political elite seek to clean money stolen from public coffers to finance their campaigns and lifestyles.

This money also enables them to buy loyalty from voters who become voting zombies during elections.

Despite the fact that most politicians are known to have been caught with their hand in the cookie jar, Kenyans-at least the majority- rarely question why those who steal from them keep rising to higher political offices.

Just recently, the questionably wealthy have been appointed to public office with total disregard to the millions of youths who are seeking after jobs which are non-existent.

This is unless they are politically connected or they have godfathers who can guide their hand in civil service employment.

The sum of it all is that most politicians are rich but the question remains how they made their money.

A few years ago, President Uhuru Kenyatta said that wealth declaration would be part of the vetting process for those seeking public office but this remains just a wayside pronouncement.

As mentioned earlier, most Kenyan politicians are wealthy but questions linger over how they made the money they claim is theirs.

Among those who keep ranking in the rich people list include the Moi Family whose influence in the political circles remains deeply entrenched in Kenya.

The Moi family is estimated to be worth Ksh 300 billion (USD3 billion) although this is a conservative estimate since the actual value cannot be ascertained.

This family has several companies with investments in every aspect of Kenya’s economy. Moi’s wealth not localised in Kenya but it is spread across the world especially in Europe.

Due to the secrecy surrounding this family’s wealth, it is safe to say that the numbers could be grossly understated by the Forbes listing. Despite this, the family remains one of the richest in Kenya and in the world.

The late Nicholas Biwott amassed his wealth as Moi’s right-hand man. The paranoid and secretive short man who was the ‘Total Man’ during Moi’s time. It is said that he called the shots in Moi’s government and that he was also instrumental in enriching the Moi family by cutting deals which enabled him to make a kill as well.

Biwott is said to have owned prime properties not only in Kenya but also in Europe a ranch in Australia. This was however denied during the funeral service of the man who controversially acquired Yaya Centre. Biwott also Air Kenya among other ventures.

The total man is reported to be worth USD1 billion by the Nigerian-based Venture magazine.

Despite his death, as a politician and a key decision-maker, the impact of his actions will remain for a long time for Kenya’s beleaguered economy.

While she is not a politician, the reclusive Mama Ngina Kenyatta is the president’s months who wields a lot of influence in the political circles.

According to the Nigerian financial magazine, Mama Ngina was the other dollar billionaire after Biwott in a list that only had Naushad Merali and Manu Chandaria as the other Kenyans.

Mama Ngina could be the wealthiest Kenyan and the 25th richest on the continent with an estimated fortune of Sh142 billion (USD1.65 billion).

Her wealth is spread throughout the economy including banking, hospitality and the real estate sectors.

Mama Ngina’s youngest son Uhuru happens to be Kenya’s fourth president who was instrumental in managing his family’s wealth.

He is estimated to be worth USD500 million, making him one of the wealthiest Kenyans.

A not so surprise appearance on this list is Raila Odinga who is basking in the glory of the handshake with Uhuru Kenyatta. He is now part of the government and he is estimated to be worth about USD250 million.

Raila has interests in oil and gas, manufacturing and logistics.

His political influence has granted him a first-row seat in Kenya’s consecutive governments which has enabled him to grow his wealth to become one of the richest politicians in Kenya. Raila calls the shots and is among the most opportunistic when it comes to running Kenya.

This list is not exhaustive but many other politicians like Deputy President William Ruto, the flamboyant Mike Sonko, retired President Mwai Kibaki and others like Ali Hassan Joho make the cut.

There are hundreds or thousands more whose lives have changed by having been in politics at one time or the other.

While old money is rarely noticed, new money is loud and ‘parte after parte’ kind of. With this, only time will tell who was rich genuinely and those who raided public coffers to enrich themselves.

Do you know anyone who should be on this list? Please share in the comments section below.

From Kilyungi Village, Keli Kiilu worked his way to be the go-to person in matters media, government, regional trade and industry.

Mzee Nzeki, wanting to escape the fine, volunteered a son to go to school

Kenyans will be contemplating whether to die of starvation or risk being infected with Covid-19 but at least get some food.