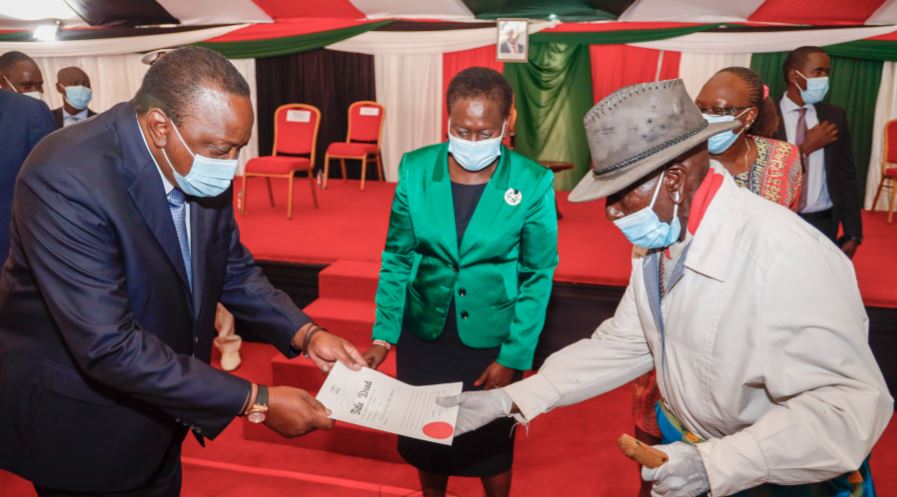 President Uhuru Kenyatta hands over a title deed to a member of the Samburu community on November 4, 2020 as Lands Cabinet Secretary Farida Karoney looks on during a ceremony in Nairobi.

The Ministry of Lands and Physical Planning on Tuesday, January 12 announced the start of the land title conversion process to ensure compliance with the Lands Registration Act.

Different pieces of legislation by different regimes had resulted in multiple land ownership registers, creating opportunities for fraud and delays in service delivery. The land title conversion process announced by Cabinet Secretary Farida Karoney aims to migrate the country to exclusive use of the Land Registration Act, 2012.

Despite the act having unified the land registration regimes, transitional clauses have been relied on to maintain the status quo.

Once a notice is published in print and broadcast media, land owners will be expected to make applications for replacement of title documents from the closed registers.

“The application shall be accompanied by the original title and the owner’s identification documents. The registrar will replace title deeds with new ones.

“The registrar shall retain the old title documents for record and safe custody,” the statement read in part.

The ministry further noted that titles held by third parties including banks, hospitals and courts as security would be replaced upon application by the proprietor.

Importantly, the conversion process will see preparation of cadastral maps and a conversion list indicating new and old numbers for parcels of land within a registration unit and their corresponding acreages.

The cadastral maps will then be published in the Kenya Gazette as well as two daily newspapers.

Any person with an interest in land in the registration unit will be able to lodge a complaint with the registrar who shall resolve the same within 90 days of receipt.

Lands management has been a thorny issue in the country for several decades due to association with corruption and fraud.

Multiple attempts at digitization have failed to deliver the expected results, with figures at Ardhi House partly responsible.