President Uhuru Kenyatta adressing the nation from State House, Nairobi on March 25. He spelt out new economic measures to cushion Kenyans from the effects of COVID-19.

Over 2,000 years ago, Greece was the most powerful empire on earth. Many words in our English vocabulary today can be traced to the Greeks, including the words democracy, theatre, Olympics, marathon and even the letters alpha and beta, which gave us the word alphabet. The Greeks also gave us the concept of ‘trial by jury’ and, in theatre, the tragedy.

However today, and painfully so, as we pen this piece, the spectacular country of Greece is on life support, the basket case of Europe, and tragically a modern-day Greek tragedy.

Greece succumbed to a crisis that its leadership then was unable to navigate through. The Greek leadership of the time slept on the job.

They miserably failed to demonstrate true leadership in times of turbulence and the effects are there for the entire globe to see.

Today the whole world faces the potential threat of the COVID-19 pandemic. COVID-19 is posing a real global crisis and if it is not resolved quickly, the final act will not be pretty. To call it tragic would be an understatement.

There is no telling if the end is near. The unfolding stories from Italy can only confirm that the worst is yet to come. It is a race against extinction and Science. We hope that Science wins by discovering the vaccine for the virus that is threatening to wipe out humanity. Even then we must remain steadfast and believe in the resilience nature of humanity.

As the virus ravages the world, the leaders of the day are being reminded of the words of the late Martin Luther King Junior, “The ultimate measure of a man is not where he stands in moments of comfort, but where he stands at times of challenge and controversy.”

A single act of bold leadership now will determine the fate of a nation. The world leadership is being tested now.

Like mythical Greece, some countries will sink completely by the time COVID-19 is fully eradicated.

One act of good leadership in the wake of COVID-19 will immortalize leadership.

Similarly, a single blunder will forever remain inscribed with indelible ink in the hearts of Kenyans.
Leadership is put to the test during times of crisis.

The first day of the nationwide curfew imposed to check the spread of COVID-19 was characterized by unwarranted police brutality.

As we watched the chaotic scene at Mombasa’s Likoni ferry, we shuddered at the imagination of what we were witnessing. There can never be any justification for beating up innocent Kenyans like we witnessed! That is unacceptable. The Inspector-General of police owes the affected Kenyans an apology.

It is scenes like this that forever dent the reputation of the police.

What was even baffling was to hear the county governor calling from the comfort of his home pretending to condemn the acts of police brutality. Governor Joho failed his people during the time they needed him most.

He failed the test of leadership. Days prior to the curfew the same governor was the loudest in asking for a total lockdown yet smaller things like curfews are falling flat on his face.

Otherwise calling in during live television news broadcast to whine like everybody else is being naive of a governor like Joho. The least he should have done was to visit the scene and show solidarity with his people.

I am sure if it was an MP who was being arrested by police the governor and members of parliament would have rushed to the scene to show solidarity!

Mark 4:37-39 records Jesus and his disciples on a boat when a furious squall came up suddenly. Jesus was fast asleep. His disciples realised what was happening was beyond them.

When his disciples woke him up, Jesus did not give excuses by whining but instead did what he needed to do; rebuked the wind and the waves. The situation normalized. Jesus, throughout his mission on earth demonstrated true leadership in times of turbulence. He did not shy away.

It is those acts of courage and boldness that define his legacy. 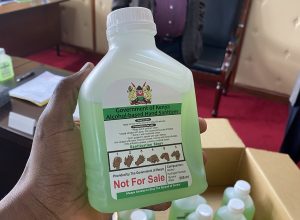