Former Citizen TV anchor Julie Gichuru. She has opened up on her struggles with depression in the past.

Former Citizen TV anchor Julie Gichuru made a rare gesture on Monday after she opened up on her troubled childhood occasioned by the noisy divorce of her parents that almost denied her the right to university education.

In a heartfelt Instagram post, the revered media personality revealed that while studying for a Law Degree in the University of Wales in 1995, her parent split, leaving her in no man’s land, a situation she says forced her to grow up faster than she had anticipated.

At the time, she was 21 years old and hopeful of becoming a top drawer lawyer after clearing her university education.

“I was in the throes of deep depression. My parents divorced. Dad remarried and Mum emigrated,” read the post.

“I had no home to go back to. I didn’t have enough money to complete my Degree. I was frightened and anxious,” she added.

According to the former Sunday Live host, the experience almost tore her up. With her parents paying no attention to her future, she was forced to become her own man.

“I lamented with God. I told him that I was so angry with him. I still loved him and asked him to hold me tight and never let me go,” she added.

She narrated that her troubles ended once she got two jobs on the trot which she thanks God for saying they have shaped her into the woman she is at the moment.

“I found two jobs at this point and studied hard. I did not know where I would end up but I knew knowledge would get me there, as long as I had breath in my body, I would get there,” she said.

The post generated quick online engagement with a huge majority of Kenyans supporting her for opening up on her difficult past.

“You are such an inspiration,” wrote Betty Carlina Thuku.

Lucy Theuri posted “Your experience is so relatable, no worse feeling than you have nowhere to call home anymore. When I think about what I have been through due to my parents’ divorce. I dread getting married. I would not want my children to experience it,”

Buoyed by the positive feedback, Gichuru said she was honoured to inspire young people and encouraged anyone struggling in life at the moment to keep soldiering on.

“The chance to inspire and give hope means a lot to me. I am touched by all your stories! You will make it,” she said.

“Let the you that you are today make a hero of you of the future. That will map a path to your own success,” she added.

Depression is a major health condition in Kenya. A report released by the World Health Organisation (WHO) in April this year ranked Kenyans as the sixth most depressed lot in Africa.

WHO defines depression as a common mental disorder characterized by persistent sadness and loss of interest in activities you normally enjoy accompanied by an inability to carry out daily activities, for at least two weeks.

The report stated that in Kenya, men are the most affected by the mental illness which mostly goes undiagnosed because most people have no clue what to look for as symptoms. 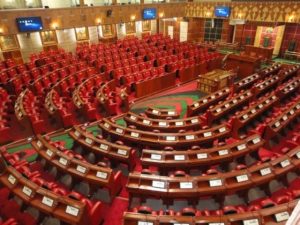