At loggerheads, even during Covid-19 pandemic. Interestingly, the loud political noise that had characterized BBI rallies has been replaced by a conspiracy of silence. [ Photo / Nairbinews ]

All Kenyans are individually and collectively engaged in the fight against the spread of COVID-19. Ironically, as the rest of the country focuses on fighting this global pandemic, a section of the ruling party is engaged in a back-and-forth push over the control of the party.

This is very strange. Everybody else is channeling energies towards fighting this global scourge that is threatening our lives. Not so for the perennial factions of the Jubilee Party.

Both Kiweleweke and Tangatanga factions are demonstrating poor leadership as the two engage each other in a battle of supremacy instead of coming up with ways to complement government efforts in addressing the already bad situation. As I said before, true leadership is demonstrated in times of turbulence.

It is disrespectful to the voters for these leaders to be preoccupied with petty party control fights when Kenyans are languishing in uncertainty and facing a bleak future. They forget that if we don’t flatten the COVID-19 curve, soon they will have nobody to vote for them. At a time like now, leaders should unite and focus on improving the health sector environment.

Our members of parliament should show empathy to the suffering Kenyans.  Any leader talking about politics of succession and 2022 elections is not only out of touch with reality but is also insensitive to what Kenyans are going through as a result of the curfew and containment occasioned by COVID-19.

Instead of engaging in cheap political talks, the legislators should use their clout and the privileged position they enjoy to lobby for free masks at least for the vulnerable Kenyans as well as legislate laws to cushion Kenyans from the worsening social-economic environment. They should lead by example by taking pay cuts so as to contribute to the national kitty that was established to coordinate donations and other forms of aid.

This is the time to demonstrate selflessness and servant leadership.

I am sure were this a campaign year, marketplaces would be littered with coloured portraits with aspirant photos asking for votes. The boda boda operators would be wearing reflector jackets with all manner of campaign messages with a view to woo unsuspecting voters. Our women would have lessos inscribed with fancy writings. The country would be flooded with cheap nylon T-shirts and caps with party slogans and empty promises aimed at hoodwinking poor voters.

SEE >> The Very Nice, and Right Thing to Have in Life

Because the elections are far, politicians no longer mind about the masses but their future stakes and fate. There is no urgency now. However, if their stakes are threatened, they would call press conferences to shout themselves hoarse, give ultimatums and read carefully drafted terse statements. Now, there is no hurry.

COVID-19 pandemic is painfully showing Kenyans who their genuine leaders are. The loud political noise that had characterized BBI rallies has been replaced by a conspiracy of silence. This shows that our political leaders have no other agenda apart from the succession politics of 2022. Theirs is political survival.

With the covid-19 uncertainty, they are now clueless. When the dust settles, Kenyans will demand their accountability.

READ >> Here is the Positive Side of Coronavirus Pandemic in Kenya

However, amidst this uncertainty, there are leaders who still are mindful of Kenyans. Kenyans see their zeal and steadfastness every day. I will acknowledge them by way of just mentioning their names. Governors of Machakos and Mombasa have consistently voiced the needs of Kenyans and have remained the voice of reason as we navigate this situation. Hon. Alfred Mutua and Hon. Hassan Joho, Kenyans are grateful to you.

CS Mutahi Kagwa and CAS Mwangangi, you two are our beaconS of hope. Much has been said about you two. I just want to confirm here that we will be indebted to you forever.

We have a shortage of good leaders. What we have are public noisemakers. Luckily, the COVID-19 pandemic has chased the noisemakers out of town. They are in quarantine, clueless and with nothing to offer; just battling for survival. 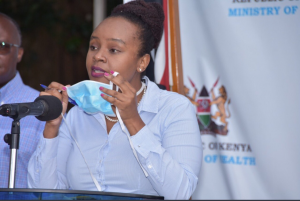