The National Employment Authority (NEA) is set to launch its operations next week Friday, part of its mandate is to place youth in employment positions in an economy that only created 840,000 jobs last year as per the Economic Survey 2019.

NEA was created in 2015 after then Nominated MP Johnson Sakaja sponsored the law with the view of having an institution that keeps statistics on the unemployed to enable the government and the private sector access the information once vacancies arise.

“Once this bill becomes law, all public entities will be required to provide internship and employment opportunities,” Sakaja said at the time.

NEA is also mandated to carve an elaborate institutional framework for employment management,enhancement of employment promotion interventions and making it easy for the youth, minority and marginalised groups to find jobs.

Tracking unemployed individuals will not be the hardest thing to do but it is finding them jobs that is likely to present NEA bosses with the headache of their lives.

The government is already struggling with an enormous wagebill and has already announced plans to introduce austerity measures while the private sector is decrying a tough operating business environment which might lead to layoffs.

So where will the jobs come from?

Reports of graduates who resort to menial jobs to eke a living after failing to secure jobs once they clear school is nothing new in Kenya, the plight of Patrick Kiilu,a water vendor who doubles up as a painter caught the attention of the public when NTV aired a feature story on him on August 27, 2018.

Kiilu is a Bachelor of Commerce graduate from the Kenyatta University.

Another report published by the Daily Nation in February which highlighted the plight of a first class economics graduate living a tough village life caught the attention of President Uhuru Kenyatta who offered her a job at the Energy Regulatory Comission (ERC).

Speaking at a media breakfast meeting convened by NEA at a Nairobi Hotel on Friday, Kihia Mwangi, an economy commentator painted a grim view of the authority’s prospects in finding well paying jobs for graduates in the formal sector.

“There’s too much pressure on the few available jobs in the formal sector. I think its high time that we train our people to create opportunities for themselves,” 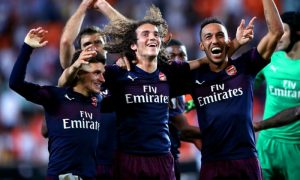 Amid Brexit blues, English teams choose to stay in Europe
Perhaps it was the royal baby that came with the…