Bic and Enactus representatives present a cheque of USD1000 to Jaramongi Oginda Odinga University who emerged the winners at the BIC Education Challenge held at the Bic offices in Kasarani on Friday last week. The money will be used to support the development of their Hydro-pads project. Photo/BIC East Africa

Students from the Jaramogi Oginga Odinga University of Science and Technology (JOOUST) made their institution proud as they emerged victorious in the first edition of the BIC Educational challenge.

The University rose above five competitors to claim top spot and secure a place at the next stage of the competition. The challenge which focuses on fostering better learning conditions by promoting social entrepreneurship and innovation in education saw submissions from students from all over the country.

The Education Challenge was launched late in 2019 as a partnership between BIC East Africa, the BIC Corporate Foundation, and Enactus Kenya. The challenge is the first step in the students’ journey to winning Ksh 5 million.

At this stage of the competition, the winning university (JOOUST) was granted Ksh 100,000 which will be used to support the development of their project. The team from Egerton University was named the first runner up receiving a grant of Ksh 60,000, and the project presented by students from Moi University was selected as the second runner up and awarded a grant of Ksh 40,000.

The winning team’s project, Hydro-Pads, focused on using water hyacinth stalks and waste papers to make hydro pads for girls. The project aims to solve most of the challenges faced by girls during menstruation and the high cost of pads in the market. The project also aims to create employment opportunities for the marginalized in the community.

Other projects also included the Agrenactus project presented by students from Moi West University, which aims to implement a low-cost self- sustaining feeding vertical agriculture program that helps provide students with learning materials

“We were very impressed with the projects presented by the students and the entrepreneurial spirit demonstrated. We are proud to have created a platform that helps showcase students’ ideas at a national and international level. It is our greatest hope to see these projects come to life and lead a positive impact in Kenya,” Sinclair noted.

The winning team will also receive mentorship from the BIC East Africa team as they prepare for the 18th Enactus National Competition taking place in June 2020.

The winners will then represent Kenya at the Enactus World Cup later in the year.

It is at the Enactus World Cup that the winner will be feted Ksh 5 million. 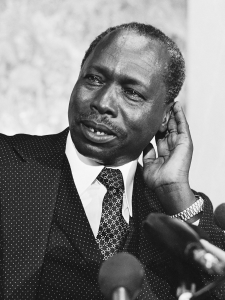