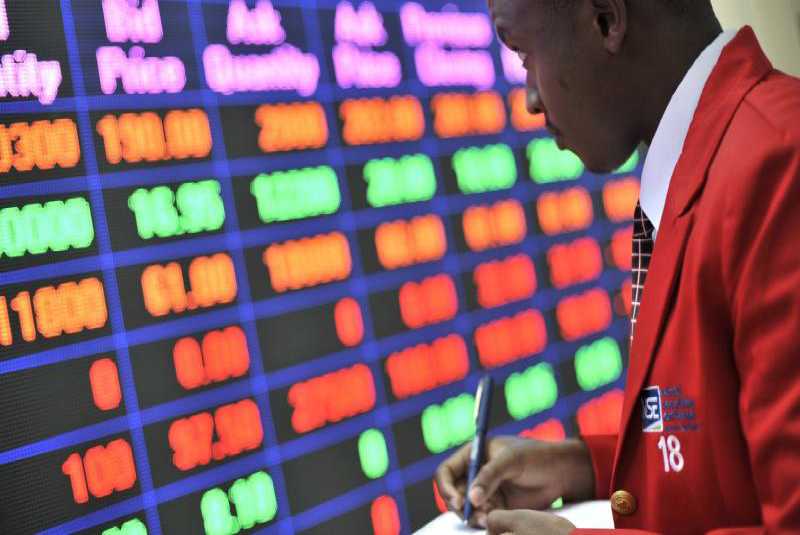 An analyst at the Nairobi Securities Exchange (NSE). Listed investments firm TransCentury has announced plans to delist from the NSE.

The increase in market capitalisation — the measure of investor wealth at the bourse — was against the decline in equity turnover registered as the NSE open the week’s trading.

The bond market also increased, from an approximate Ksh800 million posted on Friday to open the week on Ksh900 million.

Regular top trading sectors duo — banking and telecommunications — continued to rake in the big numbers on the opening trading day at the NSE. Combined, the two sectors contributed 89.78% of the day’s traded value.

Safaricom was the day’s biggest contributor, at 13.6 million shares valued at Ksh401 million. This was equivalent to 74.41% for the mobile phone operator that serves as the only listed telco at the NSE.

Banks meanwhile on the spot market had shares worth Ksh82.9 million transacted which accounted for 15.37% of the day’s traded value. Headlining these transactions were KCB Group, which actively moved 1.4 million shares valued at Ksh57 million, Equity Group Holdings which shifted 386,000 shares valued at Ksh15 million, and Barclays Bank with activity worth Ksh7.9 million in 736,000 shares.

Market indicators meanwhile performed as such

The Commercial and Services sector had shares worth Ksh5.4 million traded and accounted for 1.02% of the day’s traded value. In this sector, Scangroup was up 1.21% to Ksh12.50 and moved 412,000 shares worth Ksh5 million.

The Insurance sector had shares worth Ksh10.2 million traded and accounted for 1.89% of the day’s traded value. Kenya-Re closed the day 7.87% lower to Ksh2.81 and moved 3.46 million shares valued at Ksh9.7 million.

The Manufacturing and Allied sector had shares worth Ksh35.4 million traded and accounted for 6.57% of the day’s traded value. E.A Breweries moved 176,000 shares valued at Ksh35 million at between Ksh200 and Ksh200.75.

Nation Media Group, which is restructuring its business amid a major drop in revenues, was among the biggest losers this past week.

The suspension from trading the company’s shares take effect from July 3, 2020 and will remain in force for a period of three months.

Court allows WPP-Scangroup to hold EGM on condition that it complies with the provisions of the Capital Markets Act and Regulations.