The just-concluded G7 Summit held in Biarritz, France, comes with great news for Women Entrepreneurs in Africa. G7 leaders led by President Macron of France have committed to support the Affirmative Finance Action for Women in Africa (AFAWA) initiative with more than $200 million (Ksh20 billion).

AFAWA, which is a joint initiative of the African Development Bank and African Guarantee Fund, is a risk-sharing facility that will reduce the risk of lending to women through AGF’s partial guarantees to financial institutions. It also provides capacity development to women entrepreneurs to adequately prepare them for easier access to finance.

AFAWA takes a holistic approach to boost access to finance for women entrepreneurs in Africa. It also strengthens the capacity of women entrepreneurs and financial institutions and mobilising African governments to enact the legal, political and regulatory reforms needed for the development of women’s entrepreneurship.

“I am particularly proud, as the current G7 President, that the programme we are supporting today, the AFAWA initiative, comes from an African organisation, the African Development Bank, which works with African Guarantee Fund and a network of African banks,” President Macron said, speaking at the press conference on the AFAWA programme.

The summit brought together the leaders of Canada, France, Germany, Italy, Japan, the United Kingdom, and the United States, along with the presidents of the European Council and the European Commission, to discuss global policy issues of high relevance on diplomatic agendas.

As this year’s host, Macron chose to focus this year’s summit on the issue of reducing inequality and invited the leaders of Australia, Burkina Faso, Chile, Egypt, India, Senegal, Rwanda and South Africa to open up the discussion with other countries.

He said the initiative will go a long way in reducing the $42 billion (Ksh4 trillion) financing gap between men and women entrepreneurs in Africa .

AGF Group CEO Felix Bikpo acknowledged AFDB for spearheading the initiative and applauded the G7 leadership for recognizing the importance of women as the backbone of the continent’s growth.

“AGF’s strategy recognizes women as a great pillar of the development of African economies and has always focused on increasing access to finance for women,” Mr Bikpo stated.

In fact, 30% of the SMEs supported by AGF are owned or led by women, he said, adding, “through AFAWA, our role in financing women will be reinforced to enable even more women fully play their role as drivers of economic growth through the SMEs they own or lead.”

The official launch of AFAWA will be held in the coming months. 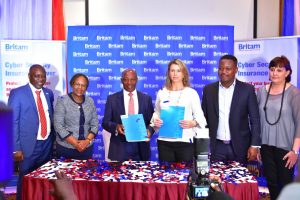