The photo shows a well-manicured homestead, and it emerged on 18th October 2022, just over a month after Uhuru Kenyatta had left office with the swearing in of President William Ruto on 13th September 2022.

The image has the caption: “An Aerial view of Retired President Uhuru’s palace in Partakilat, Trans Mara Narok County.” The post was retweeted by a number of accounts.

A review of the image, however, shows that this is not the former President’s palace. A reverse image search of the image reveals that it was first captured in an article by Golf Digest, a monthly golf magazine published by Warner Bros, on 26th April 26,  when Wayne Gretzky, a Canadian former professional ice hockey player and former head coach, paid $13.5 million to buy back the mansion he sold to former Major League Baseball player Lenny Dykstra when he declared bankruptcy.

Former President Uhuru Kenyatta had been reported to be considering settling on his 1,000-acre farm in Oloolmongi, Trans Mara, in Narok County, which he acquired in office. The vast ranch overlooks the Mara triangle – a wildlife-rich area managed by the non-profit organization The Mara Conservancy. It is typically less visited and crowded compared to the Maasai Mara National Reserve, and is one of the prime viewing locations for the Great Wildebeest Migration. 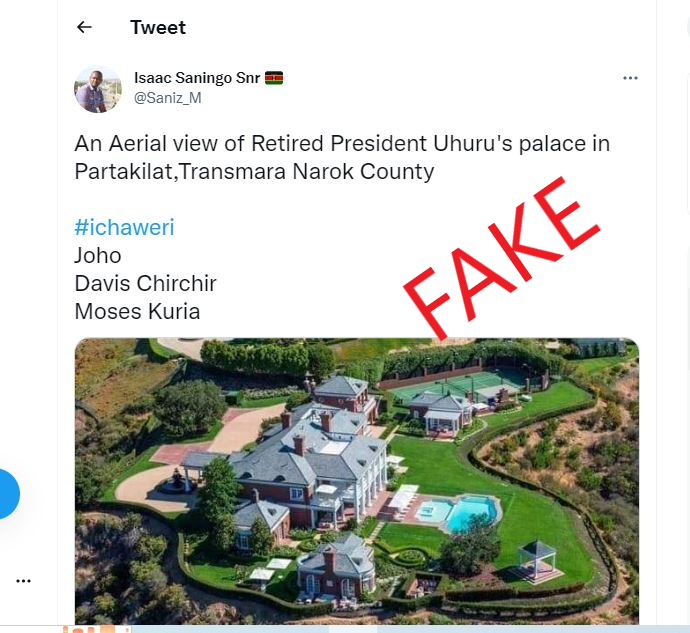 While the former President owns the 1000-acre piece of land in Narok, he has not constructed the mansion and homestead shown in the photo widely shared on social media.  Uhuru, who bought the piece of land in 2020 from the Olerein and Kengani Group, recently toured the Maasai Mara Game Resèrve in the county on holiday, engaged with area residents and delivered a bus to Partakilat Primary School.

Next >> Was Meru Governor Kawira Mwangaza Impeached By MCAs?