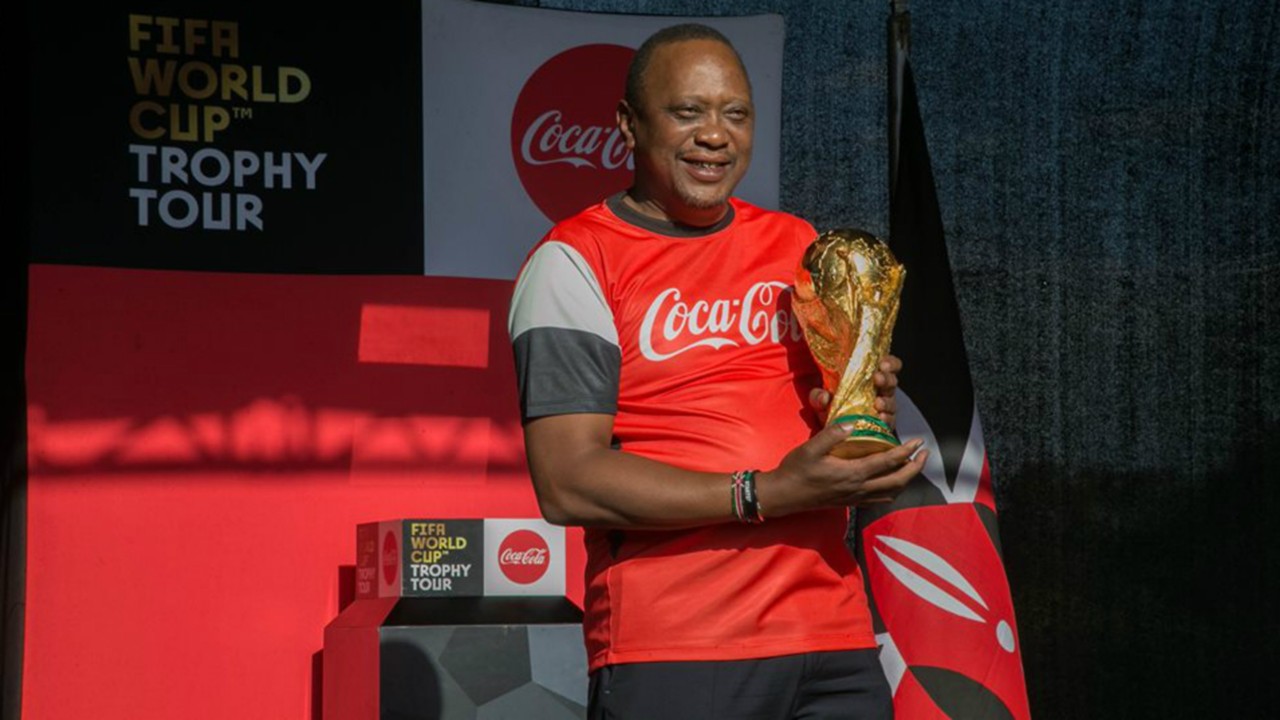 [dropcap]N[/dropcap]eedless to mention, Kenya will not be part of the June 2018 World Cup soccer fiesta to be held in Russia. However, the “good news” is that, if we cannot qualify for the World Cup, then the latter can come home, right? Exactly!

This is what happened on February 27th and 28th this year when the genuine golden cup trophy made a third tour of Nairobi, after a similar brief sojourn in Addis Ababa, Ethiopia. The trophy has been here before, in 2010 and 2013. It is a real spectacle.

The cup landed in a customized and branded Coca-Cola plane and was received like an international celebrity. The plane was even showered on touch down. Add to that the tight security, hostesses, valets … the whole razzmatazz! I mean, think of the trophy as an idol of worship made of 18 karat pure gold, a malachite base, weighing 6.1 kilograms, and standing at 36.8 centimetres high.

First, 27th the cup paid a courtesy call on President Uhuru Kenyatta at State House, Nairobi. It will interest you to note that of mortals, it is only the president who is allowed to touch or hold the trophy during its international tour. Everyone else can only fancy how it feels – kula na macho (Swahili for eating with one’s eyes).

I joined some friends working for an international media house at the Kenyatta International Convention Centre (KICC) on 28th during the day of public viewing. I was also given a media hand band, which provided me easy access to the tent where the photos were being taken with the Ksh 1 billion trophy. Suffice to say that the organisers need to get their photography together on this.

ALSO BY THIS AUTHOR: The business lessons from Nakumatt’s troubles

Anyway, who else to invest such a stupendous amount of money for the global tour than the Coca-Cola Company? You can only imagine the magnitude of the logistics involved to have an idea of the budget outlay. But it is well worth it for Coca-Cola. By the end of the tour, before the World Cup kick off in June, the trophy will have landed in 51 countries and 91 cities. These include 10 African countries.

For access, the fans were required to buy two bottles of plastic soda for Ksh100. In addition to the soda, they received a Coca-Cola branded cap and a branded nylon gym bag. Well, that was a deal.

By the end of the day, thousands of men and women must have taken a photo with the trophy, further ingraining their adoration for Coke.

The story is, we will soon have a generation that worships brands, if this has not started already. People who will do anything to be associated and validated by certain brands.

For instance, I met a former colleague, who I believe still works for a Public Relations agency and seemed part of the activation for the day at KICC. I can only remember the look and talk of exclusivity he gave me when I requested that I enter through an exit, which should have been easy since I had the media tag.