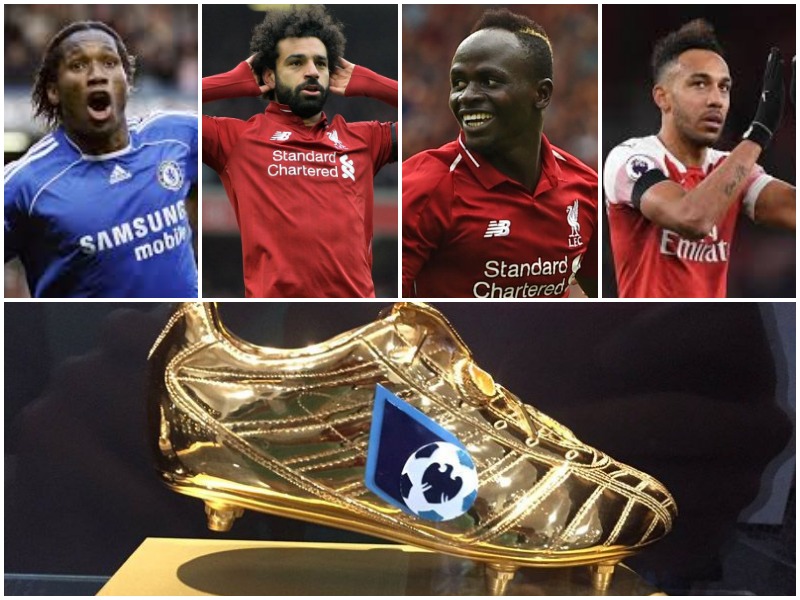 The just concluded English Premier League season has seen teams and players break records, among others, a team in runner-up with the highest points than has been seen before.

From an African point of view however, the record that has gone against all odds is the golden boot award.

As the Africa Cup of Nations looms large, three African players tied at the top with 22 goals each to bag the golden boot. Egyptian Mohamed Salah and Senegalese Sadio Mane who both play for Liverpool FC scored as many goals as Gabonese Pierre Emerick Aubameyang who plays for Arsenal FC.

Before yesterday, there were only two African players who won the Premier League Golden Boot namely Mohamed Salah from Egypt and Didier Drogba from the Ivory Coast.

McCarthy was runner up to Drogba in the 2006/07 season with 18 goals for Blackburn Rovers.

In the next season, Adebayor scored 24 goals for Arsenal to tie at second position with Liverpool’s Fernando Torres. Cristiano Ronaldo was the top scorer that season with 31 goals.

Business Today looks at the Africans who conquered England scoring the most goals in the Premier League.

Drogba won the golden boot twice during his time at Chelsea FC. The Ivorian won the prestigious award in the 2006/07 season and the 2009/10 season after scoring 20 and 29 goals respectively.

The retired footballer is arguably the most influential player in Chelsea’s history. The talismanic Ivory Coast striker joined the west London club in 2004 helping them win consecutive Premier League titles in 2005 and 2006.

He is best remembered for slotting away the decisive penalty which led to the Blues’ Champions League triumph in 2012.

[Read: Suicide grief: How to cope when a loved one commits suicide]

Aubameyang has silenced the haters in his first full season by winning the golden boot when no one could have imagined him to. The Gabonese striker joined the North London club in January last year and has already scored 32 premier league goals in 49 appearances.

Arsenal did not have the season they yearned for as they have finished 5th in the league. Although, there is some hope for them playing in next season’s Champions League. They will qualify for the Champions League if they win the Europa League final against Chelsea which has already qualified.

Aubameyang will not play in the AFCON as Gabon did not qualify for the tournament.

Without a penalty goal, the Senegalese managed to score as many goals as Salah and Aubameyang who scored a few penalties. Mane can be the true definition of a one-man guitar as he has scored 22 goals but only assisted one.

The Senegal Captain joined Liverpool in 2016 and has scored 45 Premier League goals in 92 appearances. Mane is expected to also challenge for the golden boot next season if he stays at the Merseyside club.

After playing the Champions League final, the 27-year-old will be expected to lead his team in the AFCON.

After breaking the record of most premier league goals in a 38 game season, Salah’s pressure to perform this season was imminent. He began his season on a low and many labelled him a one-season wonder. He, however, worked to retain his golden boot.

Salah is also the captain of Egypt and will be expected to lead the team to African glory on home soil. In Egypt, Salah is highly worshipped as he has scored emotional goals for the country in the past. He won Egyptians’ hearts when he scored a last minute goal to book Egypt a spot in last year’s World Cup.

Most Egyptians became Liverpool fans when Salah joined the club.