Banks are facing increased competition for business in the country as Kenyans continue to explore options tailor-made for them, data contained in the 2019 FinAcess Household Survey shows.

The report co-authored by the Central Bank of Kenya (CBK), the Kenya National Bureau of Statistics (KNBS) and the Financial Sector Deepening Kenya (FSD) shows that fewer Kenyans are depending on traditional bank accounts by the year as mobile money accounts and digital loans apps continue to grow in popularity at the expense of brick and mortar banking. 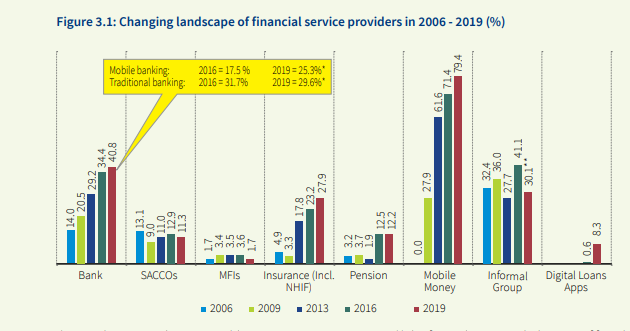 “As the country becomes more digitized, the survey results show that the frequency of transactions through mobile money increases while that of bank account reduces,” reads the report.

The report states that the high frequency in the use of mobile money, mobile banking and informal service providers on basis, could be a reflection of increasing liquidity needs, convenience and ease of access by Kenyans.

Further, the same trend manifests itself across both genders with mobile money accounts being the most popular mode with males and females.

The report only compares the popularity of digital loans apps with males and females in 2019, leaving out statistics that could have given indicators whether the apps have eaten into traditional banks’ market share.