A Facebook page using the name and photos of former Vice President Kalonzo Musyoka is not affiliated with the politician.

The page, which has been making controversial posts, has close to 24,000 followers and has been impersonating the Wiper Democratic Party leader.

Business Today found out that the page is neither owned by Mr Musyoka nor is it run by his handlers.

The politician’s handler maintained that Musyoka has one Facebook page, although it is not yet verified by Meta. 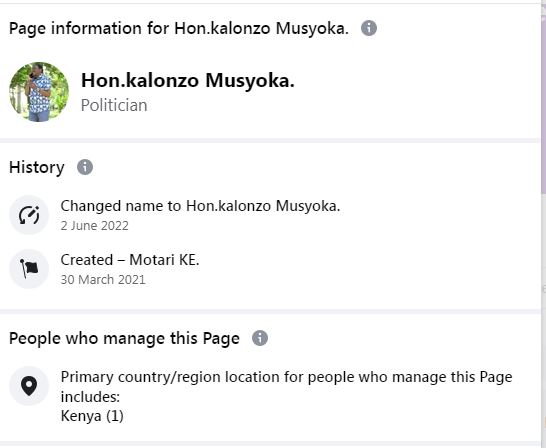 Unlike Mr Musyoka’s genuine page, the fake page has the title ‘Hon’ before his name and Kalonzo has been spelt with a small ‘K’, raising suspicion about the authenticity of the page.

The Facebook page is therefore fake and is not owned or affiliated with Mr Musyoka.

Read: Kalonzo Plays Hard To Get For Raila

>>> FAKE: Kisii Governor Simba Arati Has Not Relocated Offices Due To Witchcraft

False: KPCU Has Not Been Registered As A Private Limited Company

False: This Photo Does Not Show Mt Kenya Residents Queuing For Relief Food

False: This Image Does Not Show Former President Uhuru Kenyatta Enjoying Life In The Village