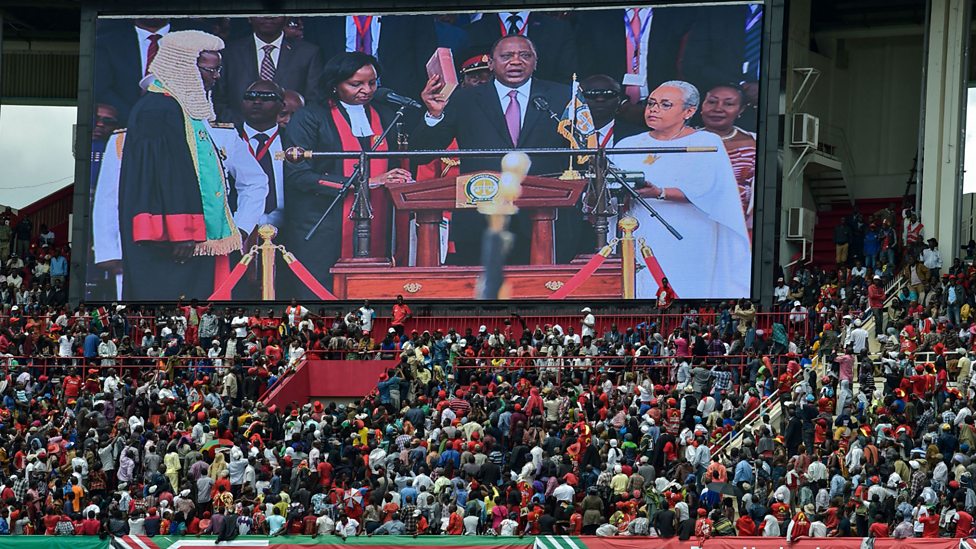 Kenyans watch on as President Uhuru Kenyatta's inauguration in 2017.

As we open the curtains for the New Year 2021, we need to remind ourselves that the destiny of any society is pegged on actions, thoughts, mores, habits, and the characters of every citizen.

The raging debate to hold a referendum based on the recommendations of the Building Bridges Initiative (BBI) has attracted different opinions from Kenyans. Many have questioned why it’s a priority to change a constitution that is barely 10 years old.

A section of Kenyans do agree that to conform to modern trends of governance and public service, changing the law is necessary. However, others contend that, in a society where citizens lack ethical values, even if we had a perfect constitution, it will be elusive to realize change.

Transforming society mostly lies in the mind and not necessarily in the laws of that society.

Prof. Charles Choti of Washington DC observes that “in the history of Kenya, it’s not a bad constitution which makes us kill each other during every election but political greed and the desire to retain power without popular will.”

A resident of Minneapolis, Mr. Shem Nyangito asserts that “If retired President Mwai Kibaki honourably conceded defeat after losing the Presidency to Raila Odinga in 2007, Kenyans could have not slaughtered each other in the violence which occurred after presidential results were announced.”

A nation that displays its problems on paper usually has leaders and citizens who lack character and integrity.

Positive change is in the hearts and minds of people. In the book of Romans 12:2, the Bible says this about transformation: “And be not conformed to this world: but be ye transformed by the renewing of your mind, that ye may prove what is that good, and acceptable, and perfect, will of God.”

Antagonists of the BBI referendum argue that if we implemented chapters 4 and 6 of the current constitution which dwells on the Bill of Rights and leadership and integrity, we could realize a just and value-driven society.

We need to question ourselves why the TJRC Report is gathering dust when it has great provisions to address historical injustices. On electoral justice, the protagonists of the referendum rarely talk about Justice Kriegler and Justice Waki’s reports but, all their energy is exerted on the BBI.

It’s noteworthy that if Wafula Chebukati, his predecessor Issack Hassan and the late Samuel Kivuitu were men of character to manage our election, violence could have not occurred; culminating in the loss of innocent lives.

The sad part, Kivuitu, Hassan, and Chebukati either due to lack of integrity and bravery bungle the election. I wish they stayed put like the outgoing Chief Justice David Maraga.

Without ethical values, a constitution cannot prevent our legislators from falsifying or exaggerating mileage claims nor will it stop those in power from employing their cronies.

Doing the right things takes will power. It doesn’t matter whether you are a regular citizen or a government official. We all contribute to Kenya’s success or doom.

How much taxpayer’s money are we going to spend to change the law in order to address our myriad political and economic challenges when we are aware of the solution lies in character and integrity?

If indeed changing  a constitution is a panacea for Kenya’s success, how many times have the current President, his deputy, and a couple of Cabinet Secretaries violated the constitution with impunity?

It’s foolhardy to change a law when you don’t respect an existing one! Changing the constitution cannot compel a leader to be morally upright, less corrupt, or less tribal.

Tanzania has about 120 tribes but they all treat each other with brotherhood and this is not because of the country’s constitution but their value system.

When looked critically, the handshake between President Uhuru Kenyatta and Raila Odinga which birthed the BBI now pushing for a referendum hasn’t done anything to advance fairness, justice, and inclusivity in the country but rather a conduit to share power amongst the top echelons of the political class.

We don’t deny, the handshake helped to thaw political animosity in the country after 2017 polls, however, most supporters of Kenyatta and Odinga in Kenya and abroad are very skeptical about the real urgency for a referendum when we have a constitution perceived to be the most progressive in Africa.

“After the handshake, we expected to see inclusivity in the structure of government and compensation to the families who bore the brunt in 2017 post-election violence as well as a complete overhaul of the IEBC.” Says Robert Ndede, a Kenyan living in New York.

Today, Kenyans are wondering why Chebukati, now busy with the verification of BBI signatures is still in office when he blatantly mismanaged the 2017 election.

Statistics by the National Cohesion and Integration Commission found out that 50% of Parastatal heads are from one community? Surely, addressing such a misnomer doesn’t need a constitutional change abut having leaders who are fair and ethical in public service.

We should strive to be honest amongst ourselves even as we deal with others in our everyday lives. If our politicians are able to be awarded fake degrees from our higher institutions of learning, where is academic integrity from the awarding institution and the awardee?

The awardee will use the fake degree to ascend to power and the cycle of dishonesty will continue in perpetuity. This is Kenya for us…a constitutional referendum cannot reverse this.

Subjecting Kenyans to another meaningless and expensive odyssey will never change a thing in the way, we conduct our public affairs.

In fact, even the political elite pushing for a referendum through the BBI should question themselves why the initiative is unpopular compared to either Okoa Kenya or Punguza Mizigo which faltered.

The “Kibaki tosha” declaration by Odinga in 2002 propelled Kibaki to the presidency. Tragically, the retired President failed to conduct national healing, entrench inclusivity, and fight graft.

Instead, he underwent a complete metamorphosis. And, due to Kibaki’s dishonesty, he betrayed Odinga by reneging the MOU they signed before the election. This is a clear demonstration of a crafty and dishonest leader.

While it’s prudent to change laws to suit prevailing circumstances, its high time key proponents of BBI, President Kenya and Odinga told Kenyans how the constitution 2010 has failed in the fight against endemic corruption, inequality, nepotism, and other vices bedeviling the country.

See Also>>>> To Wake Up From Slumber, Kenya Needs a Bobi Wine not Nelson Mandela

The Writer of This Article Is The President of Kenya Patriotic Movement, A Diaspora Lobby Based in The US.