Barely days after the word ‘boda boda’ made it to the Oxford Dictionary, a fight has broken out between Kenyans and Ugandans over the origin and copyright of the phrase, boda boda.

The fight is raging on social media, raising heated debate on how the commonly used term in the East African region came to be and who between Kenyans and Ugandans were first to use it. Boda boda is used to refer to bicycles and motorbikes used to ferry people over short distances at a fee.

Origin of the phrase

The 9th edition of the English Oxford Advanced Learners dictionary, published this week, classifies ‘boda boda’ as a noun, and defines it thus, “…a type of motorcycle or bicycle with a space for a passenger or for carrying goods, often used as a taxi.”

Boda boda is among the more than 900 latest words that producers of venerable Oxford English Dictionary have added to the 9th edition of the Oxford Advanced Learners Dictionary. Of the said words, 170 were related to technology – and more than a half-dozen to Twitter.

Appearance in the most prestigious dictionary in the world doesn’t come with any monetary value, but it has touched of n*********t emotions between the elitist social media users of the neighbouring countries, rekindling the long-drawn fight for Migingo island.

“We left for you Migingo now you want boda boda, what is wrong with Y’all Ugandans?” tweefed a Kenyan user under the account, Holy Grail. 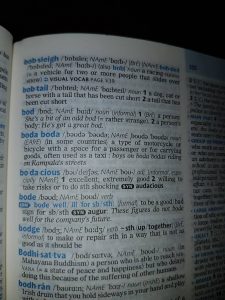 Perhaps what has emboldened Ugandans is the fact that Oxford has used a Ugandan example to illustrate the application of the word in a sentence: “Boys on boda bodas riding on Kampala’s streets.”

The term boda boda is believed to have originated from Kenya’s border town of Malaba in Busia County. It is an adaptation of the English words “border, border” shouted by their cyclists beckoning passengers towards the border with Uganda.

Bicycle riders would ferry people at a fee from areas like Busia town to Malaba. Most times people would avoid using Matatus because they were either expensive or unavailable.

To cut cost, people often walked towards to the border town. Bicycle riders would start cycling along the way shouting “border, border”. If they agreed on fare, the bicycle rider would ferry the person.

Later bicycle ‘boda boda’ concept spread to other parts of Kenya and East Africa and now motorcycles have joined the fray.

Mr Luke Mulunda, a senior journalist in Nairobi who hails from Western Kenya, says the word boda boda was coined in late 1980s in Busia when the bicycle ride/lift was commercialised.

“Initially, a cyclist would offer a free lift to a friend or relative,” says Mr Mulunda, the managing editor of Business Today. “But demand for transport between Busia town and Malava border grew and cyclists began charging to carry people or luggage.”

He said boda boda bicycles became popular because they had a way of getting people across the border without the need to complete the paperwork using a motor vehicle would necessitate.

READ ALSO: Kenya’s worst jobs and are also the most popular

“So Kenyans who wanted to sneak in and out of Uganda would use the bicycles. As the trend continued more bicycles moved in to cash in and the beckoning call border border gained momentum, which adopted the local spelling boda boda,” he says. “There’s nothing to debate, boda boda is a Kenyan name.”

Even with the emergence of motorcycles, the word boda boda has endured, now earning itself a place in the English lexicon and beating Kamusi, the Kiswahili dictionary, which is yet to adopt it.

The bicycle boda bodas have not faded away and remain a popular means of personal and commercial transport in rural Kenya, more so in Western and Nyanza.

NEXT: Boda boda operators to pay for playing music

This is not the first African world by adopted by the English language. Other words that bear African origin that have been included in the dictionary, according to Wikipedia include:

What’s your take on this boda boda debate? Scroll down and share your views in the comments section