“This means a lot,” Kipchoge said immediately after crossing the finish line, as he sprinted with energy to spare to celebrate. “I am very happy for myself, my family, all Kenyans and the whole world.”

Eliud made the promise. And when the time came, he delivered it in the most emotional and sensational way.

Eliud Kipchoge indeed proved his mantra of ‘no limits to humanity’ by being the first man to run a 42km marathon in under two hours, clocking 1:59:40, and taking Vienna and the world at large by storm.

Eliud Kipchoge set a new world record at the INEOS 1:59 Challenge in Vienna, Austria, supported by 42 pace markers, and literally competing against himself.

“This means a lot,” Kipchoge said immediately after crossing the finish line, as he sprinted with energy to spare to celebrate. “I am very happy for myself, my family, all Kenyans and the whole world.”

Kipchoge said it was a hard race to handle, taking lots of strong mental energy and tactics as well as perseverance. He said he woke up four hours to the race and time flew by like “just 30 minutes.”

The spectacular feat, which was witnessed by millions of people across the globe, also earns him a space in the Guinness Book of Records as well, turning him from record holder to an icon.

Hailed as one of the greatest athletes of all-time, Kipchoge did not disappoint at the widely-publicized event, treating millions of enthusiast to a rare blend of tact, precision, experience and a spectacular display of his prowess on the track in his quest to become the first person to run a full marathon in under two hours.

Kipchoge kept his eye on the prize throughout the race and accelerated to the finish line ending with an average speed just under 20-point-something kiometres per hour.

“I want to tell Kenyans that anyone can step out of their door and achieve their dreams,” he said, saying he would still want to push the fete further in coming marathons.

“Today reflects the positivity of sports,” he added, “I want to make running an interesting sport. And that you can wake up early morning and run. This can make the world a beautiful and peaceful place and eradicate most diseases.” 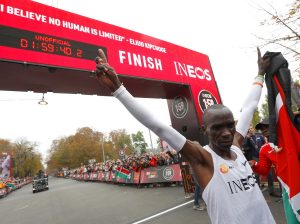