The cement produced by East African Portland Cement Company. EAPCC has suspended an earlier notice that sought to lay off the entire work force saying a replacement notice on the intended company restructuring and staff rationalization will be circulated. [Photo/EAPCC]

The East African Portland cement (EAPCC) has suspended its earlier notice that sought to lay off the entire workforce.

According to the company, a replacement notice on the intended company restructuring and staff rationalization will be circulated.

“We wish to bring to your attention that the said notice has been withdrawn,” read the memo signed by the acting Managing Director, Stephen Nthei.

The company had announced that it would lay-off all employees in a new restructuring programme to streamline operations and save the cement maker from more losses.

In the internal circular, Nthei declared all positions for both unionisable and non-unionisable workers in the company redundant.

He further indicated that Portland, which is listed on the Nairobi Securities Exchange, has been making losses of up to Ksh8 million daily, which has impacted negatively on revenues and profitability.

“Subsequently, all jobs will be reconfigured in terms of job consolidation and enrichment in line with the restructured and leaner organisation structure,” he said.

“In the last three years, the company’s market share has drastically reduced, impacting negatively on sales and subsequent profitability,” Nthei said in the memo. “This may be attributed to many reasons, key among them being increased competition and inadequate working capital.”

The company had 448 permanent and 488 contract employees on its payroll as of last year, with the former being offered a severance package of one month’s pay for every year worked as well as a gratuity payment.  In 2016, EAPCC fired 1,000 employees and reduced its staff count to 500 people as cash-flow problems set it in again.

Its chairman, Bill Lay at the time said the company was overstaffed with more than 1,500 employees. Last year, the company laid off 520 employees it opted not to renew contracts to deal with the bloated workforce. 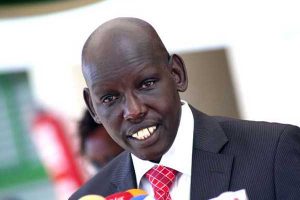