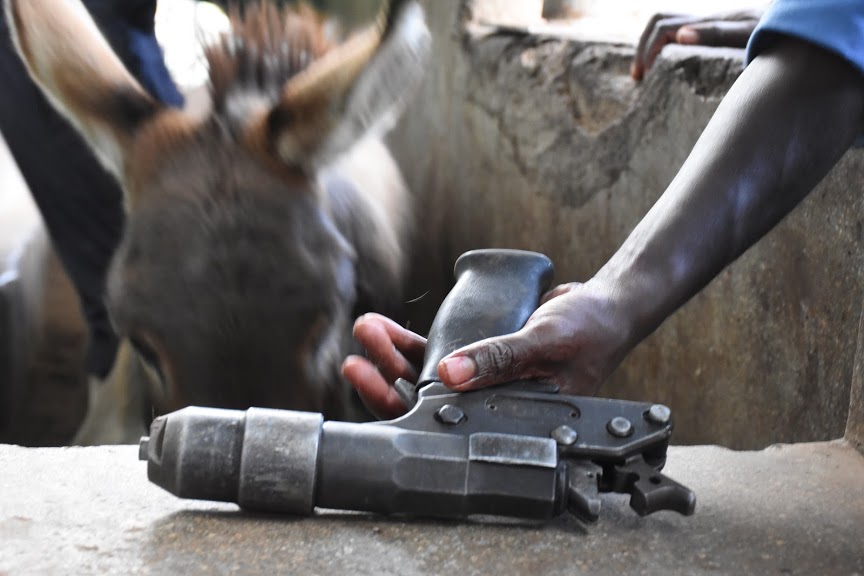 A bolt gun used to kill donkeys at a slaughterhouse in Kenya. Kenya has prohibited the killing of donkeys and their consequent export to China where their boiled-down skin is used in medicine, cosmetics and candy. [Photo/The Donkey Sanctuary]

Kenya has prohibited the killing of donkeys and their consequent export to China where their boiled-down skin is used in medicine, cosmetics and candy.

The ban followed a PETA investigation of government-sanctioned abattoirs in Mogotio and Naivasha. The investigation revealed that workers violently beat the donkeys who were then killed for a traditional Chinese medicine known as ejiao.

Read: A kick in the teeth for donkey owners

Ministry of Agriculture Cabinet Secretary Peter Munya has ordered that all donkey abattoirs in Kenya be shut down by next month.

The move comes after more than 200,000 PETA supporters sent letters urging Munya to end the donkey-skin trade. The revelations show that donkeys are packed onto trucks and forced to endure gruelling journeys to abattoirs from as far away as neighbouring countries.

The trip from the border with Ethiopia can take two days, during which the animals are not given any water or food. Many collapse while others die after the gruelling journeys.

PETA’s investigation found that workers left the bodies of two donkeys who had died during the long journey outside the abattoir and dragged another one – who was so injured that she was unable to stand – from the truck, dumped her on the ground, and kicked her.

“By shutting down these abattoirs, the country has cut ties with a cruel trade that sentences gentle donkeys to miserable deaths by the millions,” says PETA Senior Vice President of International Campaigns Jason Baker.

“No one needs donkey skin except the animals who were born in it, and PETA hopes other countries take a stand against the ejiao industry and follow suit.”

In addition, eBay and dozens of other companies have agreed to stop selling items containing ejiao.

The Donkey Sanctuary, an international animal welfare charity, in its latest report into the trade reveals that donkey populations have crashed in a number of countries as increasing demand for ejiao has led to an unsustainable number of donkeys being slaughtered.

Gelatine in donkey hides is a key ingredient in ejiao and The Donkey Sanctuary has been calling for an urgent halt to the largely unregulated global trade in donkey skins before the beasts of burden are wiped out in some areas.

China needs around 4.8 million hides per-year for ejiao production which makes it hard to meet the demand. Due to this, traders, mainly in Africa, Asia and South America, are exporting additional skins to China.

In Kenya and Ghana, where the skin trade is booming, donkeys are also being exploited with fears that their numbers could dwindle in the near future.

Government officials in Kenya have expressed serious concerns for their national herd with a slaughter rate of nearly 380,000 annually putting relentless pressure on donkey populations.

“The donkey hide trade will lead to an extinction of the species,” Raphael Ngome of the Kenya Society for the Prevention of Cruelty to Animals warns.

“Kenya faces a future without donkeys,” he adds.

With the halting of the slaughter, Kenya’s donkey populations could once again thrive but there is a risk of the trade evolving into a black market which could be a challenge to restoring the donkey number.

The details were revealed by UK Foreign Secretary Dominic Raab, who is on his first official visit to Kenya.