The recent President Uhuru Kenyatta meeting with President Donald Trump saw the signing of deals that would benefit both countries in one way or another.

Notably, the United States has gained a market for one of its big exports. A market that has been non-existent for the last 12 years as Kenya had locked some American States from exporting the product to Kenya citing the prevalence of a fungal disease.

However, Kenya will be importing from the US what it already produces on a large scale. The meeting between the two presidents saw Kenya open a wheat market for three American states. The market, estimated to be worth Ksh 50 billion, is now open to be tapped by the US.

The deal now means that American wheat from Idaho, Oregon, and Washington states, which had been locked out because of the fungal disease known as ‘flag smut of wheat’ shipped to Kenya without consideration of the state of origin or port of export. The United States Department of Agriculture has confirmed that the country will be selling the wheat to help fulfill the market’s demand in Kenya.

Kenya’s Rift Valley has invested hard in the cultivation of wheat to sell to the local and international markets. Apparently, the amount of wheat produced in the country can not satisfy its demand. The Kenyan consumption of wheat stands at 900,000 tonnes in a year while the country only produces 350,000 tonnes.

The United States Department of Agriculture now has full access to the Kenyan market to help fill the two-thirds deficit in supply.

“American farmers in the Pacific Northwest now have full access to the Kenyan wheat market,” USDA Undersecretary for marketing and regulatory programs Greg Ibach said in a statement.

The Kenya Plant Health Inspectorate Service (KEPHIS) and APHIS (the American version of the same) signed the Export Certification Protocol allowing the wheat imports to Kenya on January 28. In turn, Kenya will charge a 10% duty on all imported wheat, making it cheaper than the locally-produced commodity.

Amid discussions of a free trade pact between Nairobi and Washington, US wheat farmers are the big winners in the deal as they are assured of full access to the Ksh 50 billion Kenyan market.

“Going forward, the USDA team looks forward to building on this success and further strengthening our relationship with Kenya as we pursue a new bilateral free trade agreement that will create additional market opportunities for US producers and exporters,” said US Undersecretary for Trade and Foreign Agricultural Affairs Ted McKinney in a statement.

The two presidents announced their intention to start formal talks on a trade agreement. President Kenyatta had said a new trade deal could make Kenya a hub for US companies doing business in Africa. 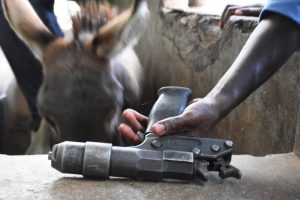 Donkey Slaughter Ends in Kenya After Peta’s Ejiao Investigation
The donkeys boiled-down skin is used in medicine, cosmetics and…