The move is part of a new strategic plan launched by the Athi Water Works Development Agency on August 16.

Along with the new strategic plan which will run for the next five years was a new logo revealed by the AWWDA, as the parastatal rebranded in what it said was a way to realign itself with new laws.

“The strategic plan is very important, not only for Athi Water Works Development Agency but also for the residents of Nairobi, Kiambu and Muranga counties; and the entire water sector,” he said.

Part of the implementation includes a target of raising the population in its area of jurisdiction with access to safe water to around 80%, approximately 6.4 million people.

At the same time, AWWDA wants to improve access to sanitation to 60%, around 4.8 million of the people in the counties of Murang’a, Kiambu and Nairobi.

“We need to change our thinking on what is really open defecation because even from good homes the waste water still goes directly into the rivers without being treated,” said Winnie Guchu, the Chief Administrative Secretary, Ministry of Water and Sanitation.

In order to fulfill its targets, the Athi Water Works Development Agency will seek to generate Ksh234.7 billion, which will be for financing water and sanitation infrastructure development.

The new logo features an A in shades of blue, with a brown gear, perhaps symbolizing the waterworks, attached to the bottom of the A sign.

The Water Works Agencies are operationalized by Kenya’s constitution which safeguards that every person has the right to reasonable standards of sanitation and to clean and safe water in adequate quantities.

Prior to the 2010 constitution, they were known as Water Services Boards. The 2016 Water Act, which came in to supplement the new constitution specified that development and management of national public works is to be undertaken by WWDAs. At the same time, each county was granted its own water works development agency. 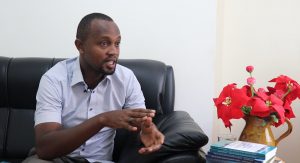