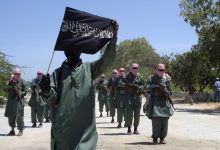 Militants of al Shabaab train with weapons on a street in the outskirts of Mogadishu, November 4, 2008. The militant group killed three teachers in Kamuthe, Garissa on Monday {REUTERS/Mowlid Abdi}

Three teachers were killed by Alshabaab fighters in Kamuthe area, Garissa County the wee hours of Monday morning, the police have confirmed.

Monday’s attack claimed the lives of three tutors, all of them non-locals just days after the Somali militant group killed four pupils from Saretho Primary School in Garissa and inflicted serious injuries on three others.

The militants were also on a mission to destroy a communication mast in the region which they managed to vandalize partially.

Reports also indicate that the fighters were targeting a police camp in the region which they torched.

“We have boots on the ground. We want to establish what transpired before we can relay more information regarding the same,” he said

This attack will come as a big blow for the North-Eastern region which is currently experiencing an acute teacher shortage fuelled by a huge exodus of teachers from the region due to frequent terror attacks.