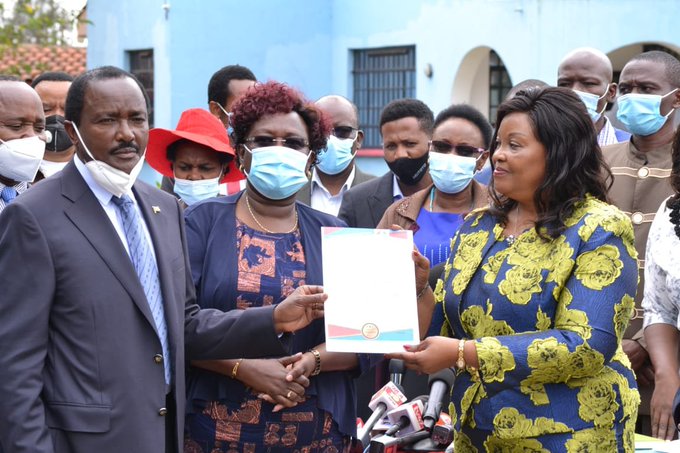 In the unveiling event, Party Leader Kalonzo Musyoka stressed that his party was not flirting with the perceived bad blood between Kavindu and Muthama stating that the nomination was based on the former’s suitability to clinch the seat.

“As wiper party we have no business in breaking families by nominating Agnes Kavindu Muthama for Machakos seat, we nominated her because of her qualifications but fortunately she shares a name with others,” Kalonzo said.

The Machakos senate seat fell vacant following the death of Senator Boniface Kabaka who breathed his last on December 11, 2020.

This will be not the first time Kavindu will be trying her hand in politics. In 2017 she vied for the Woman Rep seat in 2017 but lost to Wiper’s Joyce Kamene.

Johnstone Muthama who is now an ardent supporter of Deputy President William Ruto in May 2017 famously called for a press conference where he let Kenyans know that Kavindu was not his wife stating that they parted ways in 1983.

Kavindu will be squaring it out with Maendeleo Chap Chap Party’s candidate Mutua Katuku and UDA’s Bernard Muia for the position.

Kabaka died while receiving treatment at the Nairobi Hospital.

The lawmaker was admitted to Nairobi Hospital’s intensive care unit on December 4 after he fell ill in a Kilimani apartment.

Kabaka, who checked into the apartment on December 3, was reported to have developed a sudden headache, prompting a lady he was with, Esther Muli, to alert the apartment’s management, who called an ambulance and rushed the senator to Nairobi Hospital while in critical condition.

The Late Senator was reported to have vomited, prompting authorities to investigate a possible poisoning. Muli was consequently arrested in connection with the legislator’s sudden ailing.

A medical report on the analysis of Kabaka’s vomit samples, however, ruled out foul play after the Government Chemist communicated that there were no toxins in the senator’s vomit.

Muli, who was being held in lawful custody at the Kilimani Police Station, was consequently released on cash bail, upon the orders of a Nairobi court.