Ethiopian Airlines Flight 302. Boeing said it has been working closely with the Federal Aviation Administration (FAA) on development, planning and certification of the software enhancement, and it will be deployed across the 737 MAX fleet in the coming weeks.

The US Federal Aviation Administration (FAA) has ordered Boeing to make urgent improvements to the 737 Max 8 following the Ethiopian Airlines plane crash that claimed 157 lives on Sunday but has ruled out grounding the fleet as investigators work to piece together the aircraft’s final moments.

In a statement, Boeing revealed that for the past several months and in the aftermath of Lion Air Flight 610, Boeing has been developing a flight control software enhancement for the 737 MAX, designed to make an already safe aircraft even safer.

The statement came as Australia and Singapore joined Indonesia and China in grounding their fleets of the US plane manufacturer’s latest model.

According to The Guardian, Sunday’s scare has wiped billions of dollars off the market value of the world’s biggest planemaker, as the Boeing shares closed 5% down on Monday having fallen by as much as 13.5% at one point. Nearly 40% of the in-service fleet of 371 Boeing 737 Max jets globally have been grounded,  the US newspaper said, quoting industry publication Flightglobal, including 97 jets in the biggest market, China.

No Australian airlines fly the 737 MAX, Australia’s Civil Aviation Safety Authority (CASA) said, but two foreign carriers had previously flown the aircraft into the country — Singapore’s SilkAir and Fiji Airways. SilkAir has been temporarily barred from flying any 737 MAX out of Singapore by the city state’s aviation authority. Fiji Airways said Tuesday that it would continue flying its two 737 MAX 8s.

CASA said in a statement it was working with Fiji Airways to minimise disruptions to passengers.

But Boeing reassured the industry that safety is a core value for everyone at the planemaker and that the safety of its airplanes, customers’ passengers and their crews is always its top priority.

“The 737 MAX is a safe airplane that was designed, built and supported by our skilled employees who approach their work with the utmost integrity,” it said in a statement.

Boeing said it has been working closely with the Federal Aviation Administration (FAA) on development, planning and certification of the software enhancement, and it will be deployed across the 737 MAX fleet in the coming weeks. The update also incorporates feedback received from our customers.

“The FAA says it anticipates mandating this software enhancement with an Airworthiness Directive (AD) no later than April. We have worked with the FAA in development of this software enhancement. It is important to note that the FAA is not mandating any further action at this time, and the required actions in AD2018-23.5 continue to be appropriate,” the statement said.

In a continued airworthiness notification to the international community, the FAA said Boeing’s completion of the flight control system enhancements, which provide reduced reliance on
procedures associated with required pilot memory items are expected to be approved no later than April 2019.

“External reports are drawing similarities between this accident and the Lion Air Flight 610 accident on
October 29, 2018. However, this investigation has just begun and to date we have not been provided data to draw any conclusions or take any actions,” the notification.

According to Boeing, following the Lion Air Flight 610 accident, a pitch augmentation control law (MCAS) was implemented on the 737 MAX to improve aircraft handling characteristics and decrease pitch-up tendency at elevated angles of attack, adding it was put through flight testing as part of the certification process prior to the airplane entering service.

“MCAS does not control the airplane in normal flight; it improves the behavior of the airplane in a non-normal part of the operating envelope,” the plane maker said even as aviation experts questioned whether a computer error may have been responsible for both the Lion Air Flight 610 and the Ethiopian Airlines Flight 302 from Addis Ababa to Nairobi. The Lion Air Flight 610  into the Java Sea 12 minutes after takeoff killing all 189 passengers and crew on October 29, 2018. The Ethiopian Airlines plane crashed six minutes after taking off from Bole International Airport.

Boeing says its 737 MAX Flight Crew Operations Manual (FCOM) already outlines an existing procedure to safely handle the unlikely event of erroneous data coming from an angle of attack (AOA) sensor. The pilot will always be able to override the flight control law using electric trim or manual trim. In addition, it can be controlled through the use of the existing runaway stabilizer procedure as reinforced in the Operations Manual Bulletin (OMB) issued on November 6, 2018.

“Additionally, we would like to express our deepest condolences to those who lost loved ones on Ethiopian Airlines Flight 302. A Boeing technical team is at the crash site to provide technical assistance under the direction of the Ethiopia Accident Investigation Bureau and U.S. National Transportation Safety Board. It is still early in the investigation, as we seek to understand the cause of the accident,” it added. 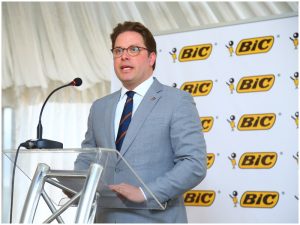