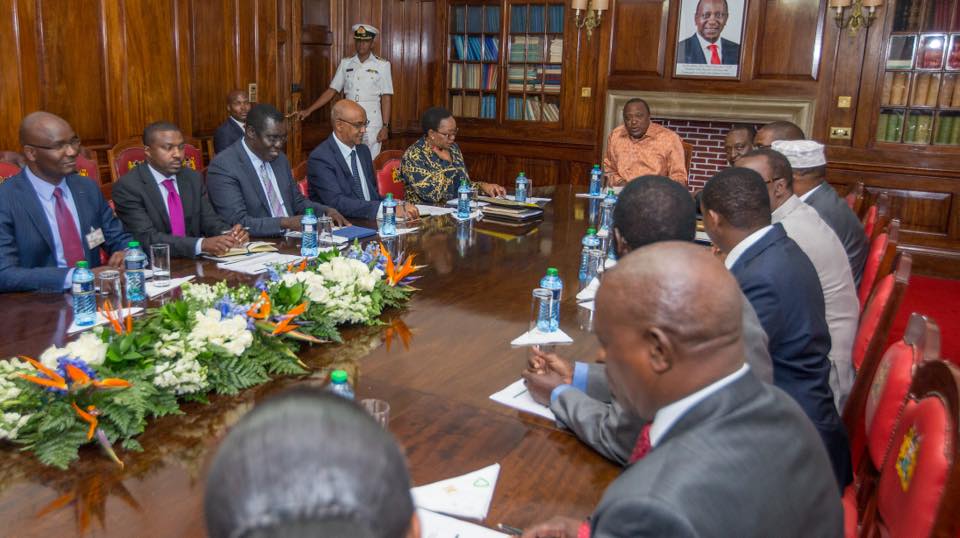 The UHC pilot will be rolled out in the four Counties of Isiolo, Kisumu, Nyeri and Machakos before it is finally scaled up to cover the rest of the country. The decision was arrived at on Tuesday morning when President Kenyatta met with the UHC Inter-Governmental Committee at State House, Nairobi.

The committee co-chaired by Health Cabinet Secretary Sicily Kariuki and Isiolo Governor Mohammed Kuti briefed the President on their preparations ahead of the pilot programme launch. The success of the pilot programme in the four counties will give clearance for full scale role out of UHC ushering in a new era of public health services provision in the country.

Governors Mutahi Kahiga, Prof. Anyang Nyong’o and Dr Alfred Mutua represented the other counties in the pilot namely Nyeri, Kisumu and Machakos. The President gave the committee his approval to finalise the launch plans and also come up with respective Memoranda of Understanding (MOUs) between the ministry of Health and the four counties.

The Head of State encouraged the governors to actively participate in an intensive sensitisation exercise in the month of November before the pilot project is launched. The new UHC package will benefit at least 3.2 million Kenyans in the four pilot counties and is expected to contain a new bouquet of services accessible to Kenyans in public health facilities.

According to the Government, the decision to pilot the programme in the four counties was evidence-based considering their disease burdens. Kisumu was identified because it leads in the infectious diseases category especially for HIV/Aids and tuberculosis while Machakos records the highest numbers of injuries mostly from accidents occurring along the busy Mombasa-Nairobi highway and the many winding roads in the county.

Nyeri is part of the pilot because it leads in the non-communicable diseases segment especially diabetes while in Isiolo, the Government will seek to establish how the package is well suited for nomadic and migratory populations.

“Piloting the package in a controlled population ensures less chances of failure and we can minimise the risks when the programme is later scaled up to cover the entire country,” said Kariuki in an earlier statement.

World Aids Day which is observed every year on December 1 has been marked since 1988 and provides an opportunity to draw attention to the HIV epidemic around the world. “Know your status” is the theme of the World Aids Day 2018.