Ilana will assume her new role on July 1 and will be tasked with overall financial planning, management, and oversight of the organization

She joined Safaricom in 2017 as Head of Finance Planning and Investor Relations. She previously worked as CFO for Digicel Group in Vanuatu, South East Asia. Prior to that, she worked as the Group Finance Manager, Asia Pacific, based in Singapore.

Her resume also includes various positions such as Contract Finance Manager for Unilever, Ireland, and Financial Controller for Bird Eye in Ireland.

During her stint as the Head of Investor Relations, Darcy played a key role as the company achieved several milestones. She helped strengthen the firm’s stock attractiveness by overseeing the growth of the company’s share price from Ksh18.57 to the current Ksh28.90.

She helped deliver the Hyperion Project that saw Safaricom move from the manual to a system-generated style of reporting, leading to greater efficiencies.

She holds a Bachelor of International Commerce with Italian from the University College Dublin and is a member of the Chartered Institute of Management Accountants.

“Ilanna has more than 20 year’s experience, 13 at senior level, and has worked across three continents in the retail, FMCG and telecommunications sectors,” Ndegwa said. 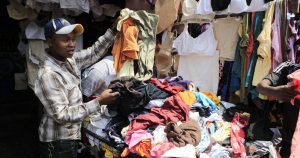