Equity Bank confirmed that two of its staff and some KRA officials are to be prosecuted over their role.

A new report by International Finance Corporation (IFC), a member of the World Bank Group, has recognised Equity Bank as one of the corporates demonstrating the potential roles of the private sector in supporting refugees and host communities.

The study, which examined more than 170 private sector initiatives, focused on refugees and host communities in Africa and the Middle East, found that 60% of surveyed companies expected to deepen their refugee-related engagements in the coming years. The report terms this as very important since private firms are well-placed to create the jobs and economic opportunities that many refugees desperately need.

Dubbed Private Sector & Refugees: Pathways to Scale, it was produced in partnership with The Bridgespan Group.

“This new study reveals how the private sector can play an important role by engaging refugees as employees, employers, producers, and customers – and identifies ways to scale up these projects so that refugees can make greater economic contributions to their host communities, while becoming more self-reliant.”

Equity Bank started reaching out to refugees in 2012, by opening branches in Dadaab and Kakuma, two of Kenya’s largest refugee settlements, home to a total of 380,000 refugees.

“Extending services to refugees (in Kenya) was a lateral expansion. It was part of a strategy to become a financially inclusive bank,” said Waititu.

Equity’s leadership not only supported this but also dedicated significant resources to this move, including a team within its Special Projects Unit that works on financial inclusion for vulnerable populations such as refugees.

Equity Bank is currently working with the IFC to design new savings and microcredit programs. The Bank also seeks to engage more refugees and other unbanked populations through programs such as financial education and entrepreneurship skills.

“Refugees are entrepreneurial. A lot of trade happens within and around camps,” said Waititu.

Ultimately, Equity Bank sees refugees as long-term customers, and advocates for changes, such as more cash-based assistance, that will help them participate better in the private sector. Equity Bank also seeks to affect policy changes regarding identification requirements to access banking and government services, which constitute significant barriers for refugees, and advocates for further innovation – such as digital identity – on their behalf.

The report says Equity Bank has now become even more aware of the local needs, regulations, and ways to help. In addition to bank accounts and debit cards, Equity offers refugees access to a range of products, such as personal banking and microcredits, and group savings and lending products (including loans to both households and small businesses). 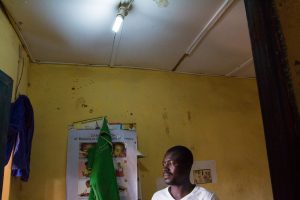