Raila Odinga with President Uhuru Kenyatta and his daughter Rosemary at the prayer breakfast in Washington DC, USA. Raila has not been able to pay his last respects to the late President Daniel Moi in person. [Photo/PSCU]

Former Prime Minister Raila Odinga is currently at Parliament Buildings where he has gone to express his last respects to former President Daniel Arap Moi.

Raila has been out of the country for the past one week engaged in different international assignments.

It has been a chaotically busy period for Raila Odinga whose diary seems to be full since the handshake with President Uhuru Kenyatta.

In the spirit of fomenting peace for the country, after the handshake, Raila is now busy travelling the world on government assignments with the latest being his accompanying Uhuru to the United States for a prayer breakfast.

Afterwards, the two met the business community in the US both Kenyan and American with goodies expected to come from this visit.

While Uhuru came back to the country on Saturday, Raila is still outside the country in Ethiopia where the AU Summit is ongoing.

This despite the fact that the body of former President Daniel Arap Moi is lying in state as the country mourns the passing of the icon.

Raila’s absence has raised concerns on whether he was avoiding the statesman even in his death. A statesman himself, Raila, could be expected to lead the way in mourning the former president who passed on last week.

To assure those interested of his whereabouts, on Sunday, photos appeared on Raila’s Twitter account where he was captured signing a condolence book at the AU precincts.

“Signed the condolence book for President Daniel arap Moi at the AU Complex in Addis Ababa. Looking forward to joining fellow citizens in mourning the former president back home in Nairobi and Kabarak.”

The terse statement did not indicate if Raila would be at parliament to view the body before the body is taken away or at the memorial service slated for Tuesday.

Last week, the government declared Tuesday a public holiday for Kenyans to be able to follow proceedings of the memorial at Nyayo Stadium.

“The Cabinet Secretary for Interior and Co-ordination of National Government declares Tuesday, the 11th February 2020, to be a public holiday throughout Kenya in order to accord all Kenyans the opportunity to attend the National Memorial Service in honour of the life of the late H.E Daniel Torotich arap Moi,” the gazette notice read in part.

Moi died on Tuesday 4th February at an official time of life of 95 although his age remains a mystery since many people are claiming he is older than that.

Officially President Moi was 95 but his Press Secretary Lee Njiru dropped a bombshell estimating Mzee’s age to be between 102-103.

Njiru was dismissing reports by local and international media which reported Moi’s age based on the data on his ID.

Also see why Moi could be older than the official ID age.

As a statesman, Raila understands diplomacy in handling situations and how to deal with the passing of the elder Moi is one of them.

On February 4, Raila issued a statement where he eulogised Moi gregariously.

Mama Ida and I mourn the passing of President Daniel Arap Moi. We give thanks for his long life of service to this nation.

President Moi has had a chequered career and leaves behind a rich history, from representing the Rift Valley in the Legislative Council to MP for Baringo Central, Vice President and President.

I first met President Moi in 1958 when my father Jaramogi Oginga Odinga invited the first African elected members of the Legislative Council to our home in Bondo. I was a teenager and Moi, who represented the Rift Valley, was in the company of Masinde Muliro, Lawrence Oguda, Tom Mboya, Bernard Mate, James Muimi and Ronald Ngala. They operated under the auspices of African Elected Members Organisation, with Jaramogi as their chairman.

From that initial encounter, our paths and careers were later to cross in various capacities and roles.

Moi inherited a fairly polarised political landscape when he became President in 1978. He strived to hold the country together as he struggled to unite the people, often with mixed results.

The decision by his administration to make the country a single party state became a major point of disagreement in our politics that caused the clamour for the repeal of Section 2 (a).

To his credit, President Moi gave in to the clamour for change and allowed the country to return to multiparty politics. He was constantly able to ease pressure in the country through incremental reforms.

Moi and I reconciled after the political differences of the 1980s and early 90s and we were able to work together to bring more reforms to the country.

Our cooperation gave way to merger with his party KANU, which put the country firmly on the path to a new constitution by enabling the formation of the Constitution of Kenya Review Commission (CKRC).

In his retirement, again to his credit, President Moi carried and conducted himself with complete dignity befitting an elder statesman.

I am grateful for the time I spent with him. At this moment of mourning, our hearts and prayers are with the family and the entire Moi clan.

With the late president’s burial on Saturday, Raila will be one of the people to watch having being one of those who suffered the most under Moi’s rule. 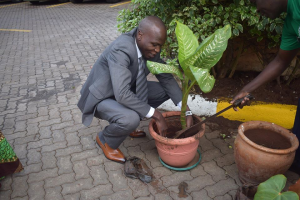