Safaricom on Friday 24th January handed over the first apartment in the Lipa Na M-PESA Do More promotion. Turns out, Reuben Keitany has a lucky streak as in 2017 he also won an expensive smartphone in a similar promotion.

“I have been a Lipa Na M-PESA customer for long due to the convenience and affordability of the service when paying for my shopping and when depositing and withdrawing from my bank account,” Mr Keitany said. “Emerging as the first winner of the three-bedroom apartment has come as a sweet surprise and is a great way to start 2020.”

He said he would keep the house as a family home for his wife and 5 children.

It is second time lucky for Reuben who previously won a Neon 4 smartphone in a Safaricom promotion in 2017.

Safaricom also rewarded more than 40 Lipa Na M-PESA merchants with tuk-tuks as part of the promotion, with five businesses in each across the eight regions named among the winners.

“Lipa Na M-PESA has become the most popular and widely accepted alternative to cash in the country due to the convenience of the mobile phone. The promotion seeks to reward our customers for using the service and also seeks to encourage more Kenyans to switch to cashless payments in the war against cash,” said Mr Nicholas Mulila, Chief Corporate Security Officer, Safaricom.

Customer prizes include surprise cashback where eight customers across the 8 regions will receive an M-PESA deposit every minute.  Businesses that accept Lipa Na M-PESA will all receive 25% of their transaction charges back every midnight.

Customers also stand to win one of six three-bedroom apartments in weekly draws, while one customer in each of the 8 regions will win a tractor with plough and trailer in the grand draw.

Tuktuk winners for all 8 Regions

NEXT >> This Lady Reminds You to Drink Water, and Makes Millions Out of it! 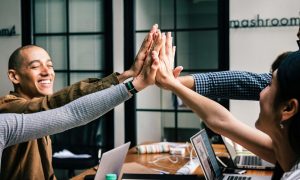 Startup to Scale Up: How to Get the Best Talent For Your Business
Whether you are looking for entry-level or leader, finding the…