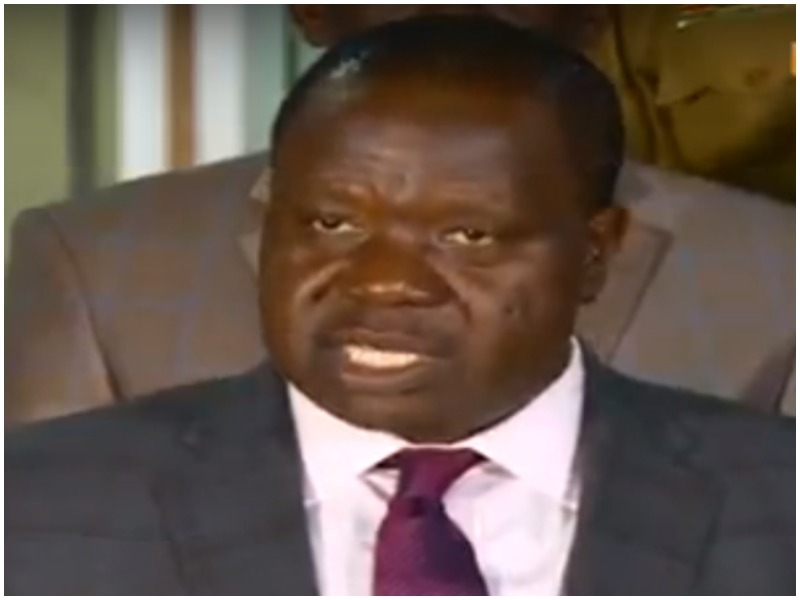 The Internal Security CS said security teams had also evacuated scores of Kenyans and other nationalities from the buildings.

“We are now in the final stages of mopping up the area and securing evidence and documenting the consequences of this unfortunate event.”

Dr.  Matiang’i also assured the public that Kenya is now safe and that normalcy could resume.

The Cabinet Secretary also informed the country that President Uhuru Kenyatta had continously been briefed on the matter.

“We have been tested and found not wanting,” he said. “We remain an integral part of the international community that stands up to terror in all its guises.”

Dr. Matiang’i was speaking almost seven hours since the attack at the Dusit D2 Hotel had began.

The CS said that from around 3:30pm, he joined the National Security Advisory Committee which began coordinating the government response to the Riverside Attack.

He referred to the incident at Westlands as “heinous and cowardly.”

Dr. Matiang’i echoed Police boss Joseph Boinnet by saying that the security response to the attack was “swift, determined and involved different security agencies under a singular command of the GSU commandant.”

The response was also supported by a multi-agency team drawn from the security apparatus in the country, the CS added.

Dr. Matiang’i said, “The situation is under control and the country is now safe… terrorism will never defeat us and we as a country remain strong and determined and we will not surrender or bend to any manipulation or efforts of terrorist elements.”

The brief from the Internal Security CS came even as local media reports showed families still waiting for their loved ones who were still trapped within the area.

The attack that rocked the Dusit D2 Hotel began at around 3pm on January 15, with explosions and gunshots being heard from the area.

IG Boinnet had earlier said that special forces were engaged in flushing out the suspected terror assailants, while also assuring the public to cooperate with security agencies and remain vigilant.

The Police boss also advised against spreading unverified information on social media, as sympathisers of the attack had also taken part in the conversation online.