Machakos governor Alfred Mutua has recorded a statement at Kilimani Police station claiming that his life is in danger.

The Maendeleo Chap Chap Party leader said he is being threatened because of his constant attacks on the DP. Mutua shared his statement on social media where he said that the threats should not be taken lightly given Kenya’s history in political assassinations.

“Due to Kenya’s history of political assassinations, political violence, and intolerance, the seriousness of these threats can’t be gainsaid,” Mutua noted.

In the statement, the Machakos County top man gave details of his conversations with Duale, Murkomen and the Deputy President. According to Mutua, all the threats happened during state events at the State House.

Mutua claims that he was first threatened by the National Assembly Majority Leader Aden Duale and Senate Majority Leader Kipchumba Murkomen. During this first incident, Mutua claims he was attending the launch of the Building Bridges Initiative (BBI) report at State House.

The former government spokesman said he was conversing with Duale and Murkomen as they were waiting for the event to start when he received threats from them.

The Machakos governor further noted that he has also received threats from the Deputy President himself. According to him, the threats he received from Murkomen and Duale were because of his attacks on the DP.

In the same statement, governor Mutua said he was also threatened by the Deputy President when attending a banquet in honour of the Barnados Prime Minister Rt. Hon Mia Motley. According to Mutua, the DP complained that he (Mutua) has been attacking him.

Mutua recently joined hands with ODM leader Raila Odinga. He led a delegation of Ukambani Governors to campaign for ODM candidate in Kibra by-elections Imran Okoth in November last month. Imran was running against Ruto’s candidate MacDonald Mariga. Both Mutua and Raila have promised to work together in the coming general elections.

Last week, reports emerged that Wiper leader Kalonzo Musyoka was plotting an alliance with Ruto . The story was first shared by former Machakos Senator Johnson Muthama, who said that he will lead a delegation of Kamba leaders to meet Ruto’s camp.

Despite the fact that Kalonzo denied these allegations, Mutua released a statement saying they will not allow the community to be sold to the highest bidder. 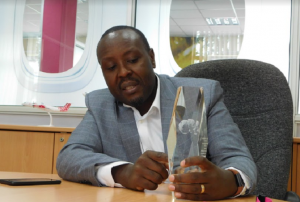