The Law Society of Kenya issued a seven-day ultimatum to the government to publish the buildings identified for demolition failure to which the lawyers body will sue the State.

In a press release on Thursday August 16, LSK raised questions of due process nature in relation to how the government has been implementing the demolition of buildings said to be sitting on riparian land.

The statement signed by the LSK top brass among them the Society’s head Allen Waiyaki Gichuhi criticised the lack of clarity over what law was being used to carry out the demolitions that have gripped the city in recent weeks.

“It is not clear if the current destruction of private properties affects those on riparian land or those that may have been unlawfully acquired,” says the lawyers society.

“We urgently demand that the notice identifying the buildings scheduled for demolition be gazetted within the next seven days so that members of the public are aware of which properties are affected and under what regime of law the properties are being demolished,” LSK said.

The Law Society justified their demand by stating that Kenyans have the constitutional right to access information. “If there is a report of properties identified for demolition, thn this report should be made public through Kenya gazette.” According to LSK, this will quash unnecessary speculations and protect third parties from dealings with the affected properties.

“The state should impugn irregular and unlawful developments without compromising those that were built in accordance with the law and procedure." @LSKPresident on the on-going demolition of properties. pic.twitter.com/BdEqV67I1G

In the same light, LSK demanded an audit of regulatory process within the administrative arms of government as allegations of approvals being carried out without due process were worrying.

What is riparian land?

Over the past two weeks, the government has overseen a crackdown of buildings which are said to be housed on riparian land.

Riparian lands are parcels that occur along watercourses and water bodies. As per Article 67 of the Kenyan Constitution, riparian land is denoted as public land hence should not be allocated to anyone.

The National Environment Management Authority (NEMA) thus says it has been carrying out demolitions of structures in Nairobi found on these properties as they have been erected illegally.

As of now, Ukay Centre in Parklands, Shell Petrol Station and Java House in Kileleshwa, South End Mall along Lang’ata Road and a section of the Oshwal Centre in Westlands have been demolished in the exercise. Most of the demolitions have occurred as a surprise to the general public with some expressing shock and decrying losses suffered.

Taj Mall which is located in Outering Ring Road, Embakasi has also been earmarked to be brought down. Amid rumours that Weston Hotel along Lang’ata Road could also go down, Nairobi Governor Mike Sonko has denied issuing notice to the Deputy President William Ruto owned hotel.

LSK has argued that whereas irregular and unlawful developments should be brought down, the government should ensure innocent parties who took diligence to undergo due process should be compensated.

The lawyers body also states the government should be careful to reconcile the law with modern times. “Our environment and planning laws have evolved over time and in some instances developments have predated the law. The state should ensure that the application of the current law does not result in the malicious deprivation of private property.” 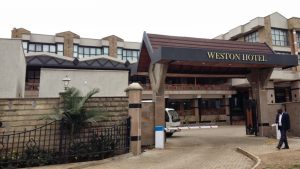